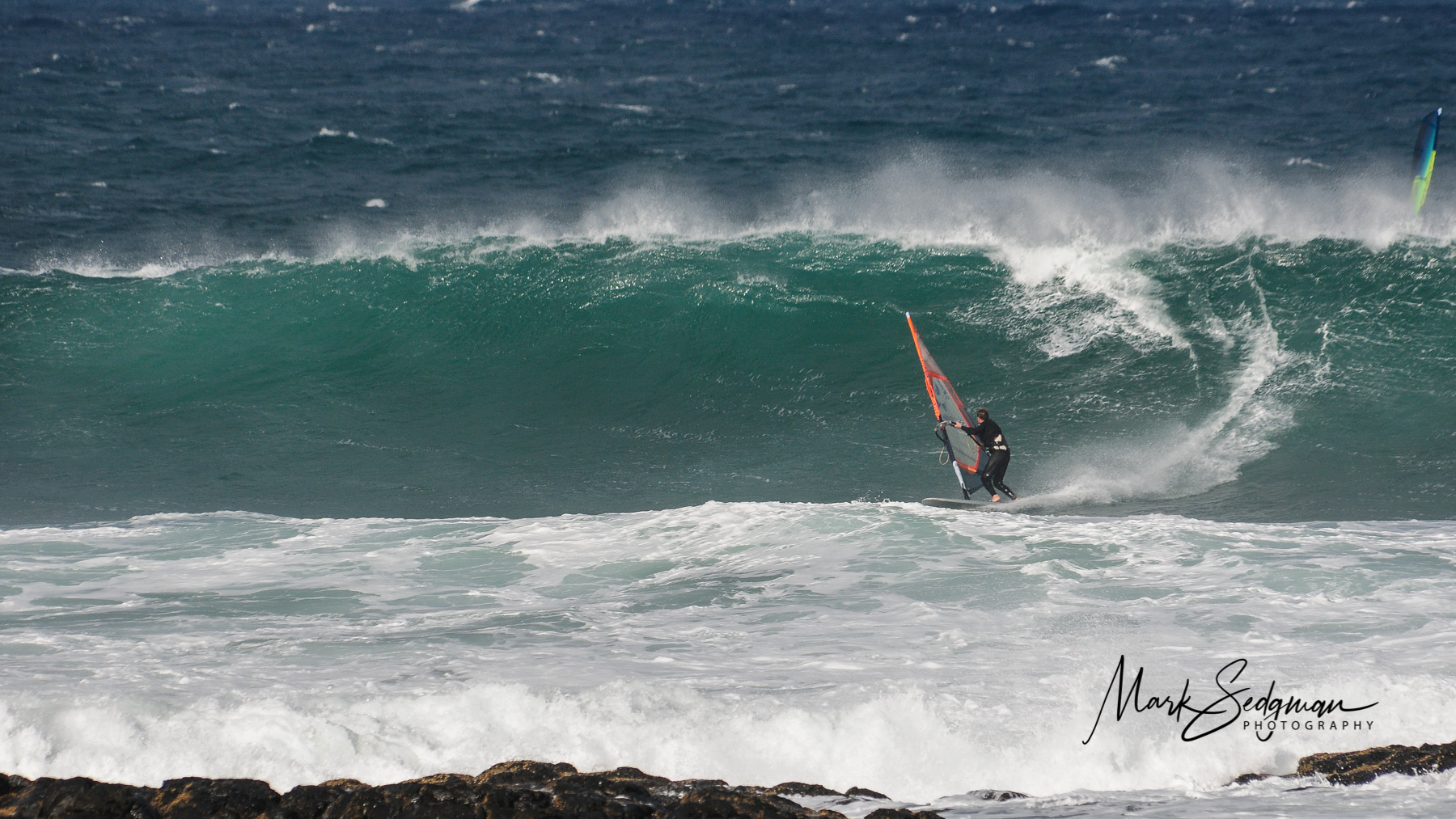 Surfies Point is a polarising wave – short, fat and boring or a heavy, scary adrenaline rush depending on your perspective and/or conditions on the day. The break is versatile, being good for both jumping and riding. Surfies works from a moderate size and can hold as big as the Southern Ocean throws out.

On a properly sized day, Surfies Point is comparable to a right hand version of Margaret River Main Break – with more rocks! A thick, heaving peak sucks up behind the rock point and quickly runs into a deep channel before fattening out.

Although it is not windsurfed that frequently (except for a few hardcore Phillip Island locals) – Surfies Point is a very reliable windsurfing option, generally receiving better wind than the Surf Coast and bigger swell than Waratah Bay. It is certainly worth a try for a range of skill levels, just be sure to match ability to the conditions on the day.

8ft+ long period ground swell with 20-25 knot NW-WNW wind and mid tide for heavy peaks behind the rock and an adrenaline rush. For mellower waves, 6ft swell and a strong W-NW wind on mid tide. 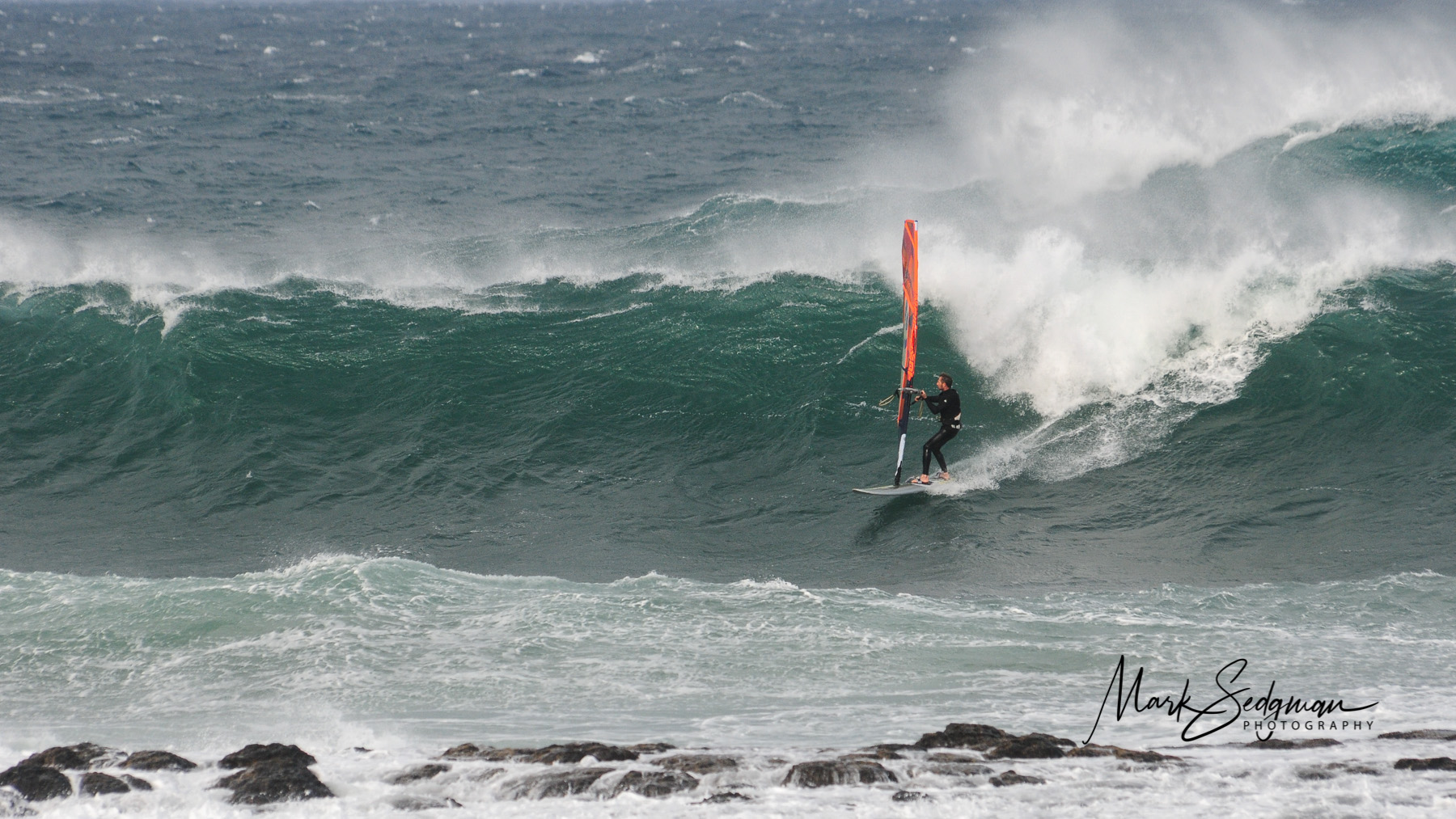 Above: Big sets stacking up at Surfies Point. Jono from Surf Trax is a regular out there. Picture by Mark Sedgman.

Below:
1. Surfies is good for jumping even if the wind has a touch of north, as long as it is strong. Pick up speed through the rip and hit the peaks downwind on the beach break or the bigger wide ones breaking off the point. 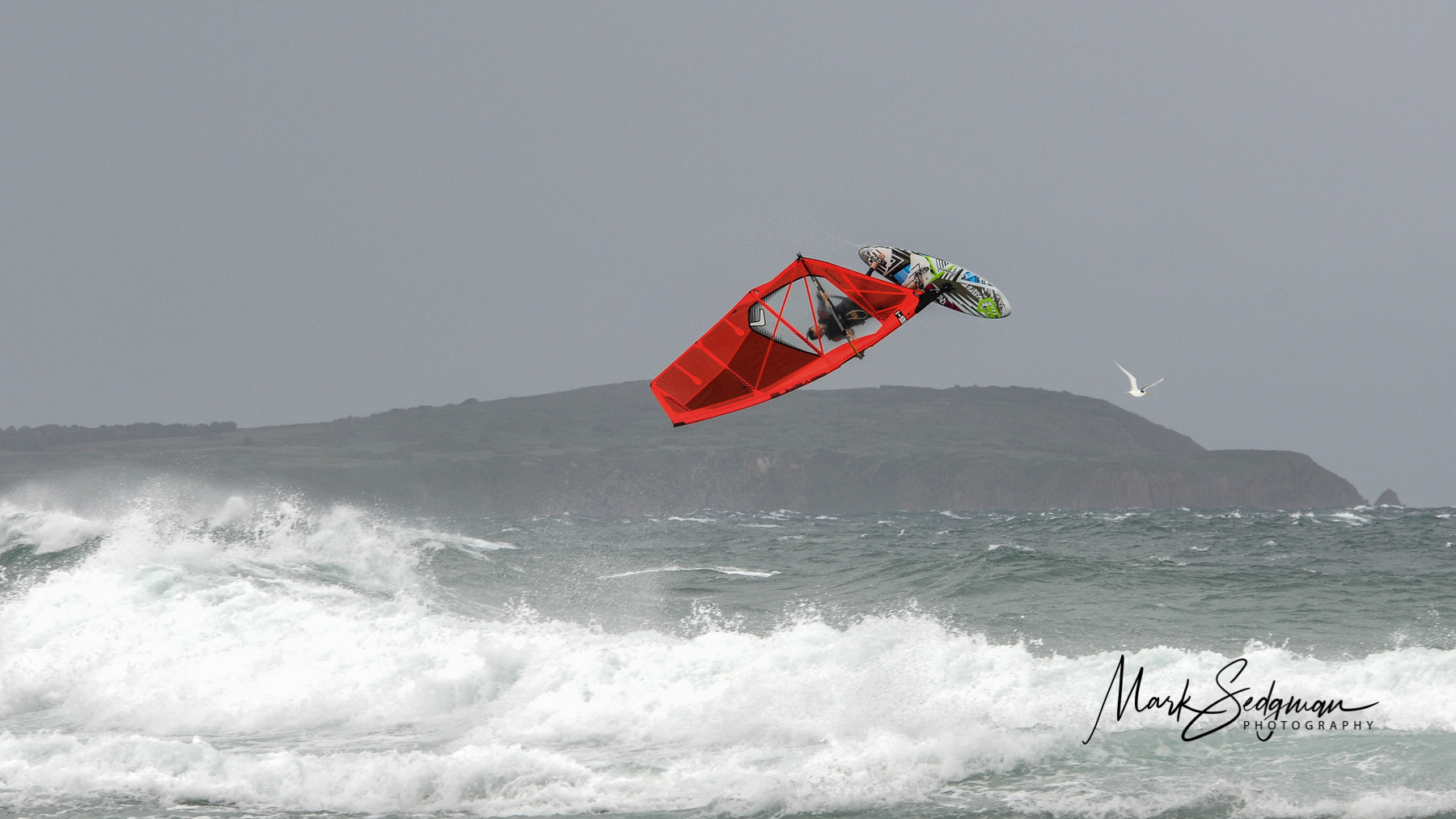 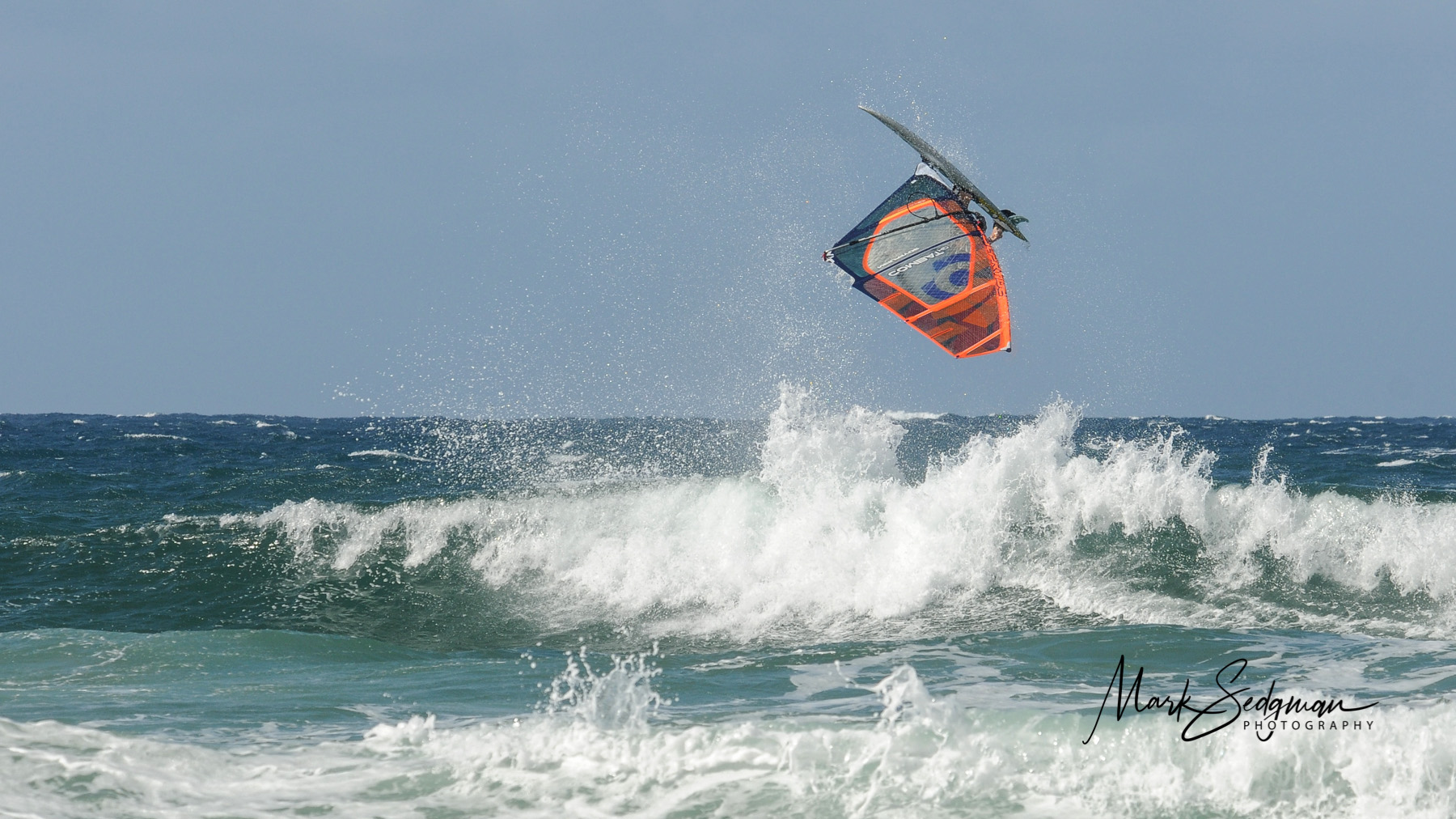 Below:
1. When the swell is big, the smaller waves tend to have perfectly glassy faces for smooth bottom turns – but they will fade off into the deep water fast. Be conscious not to take one of these smaller ones and kick out into a huge wide set that will send you swimming.

2. Watch the rocks on the shoreline when launching and landing on high tides and solid swells. It is easy to cut your feet or knock out a fin if you are not careful. 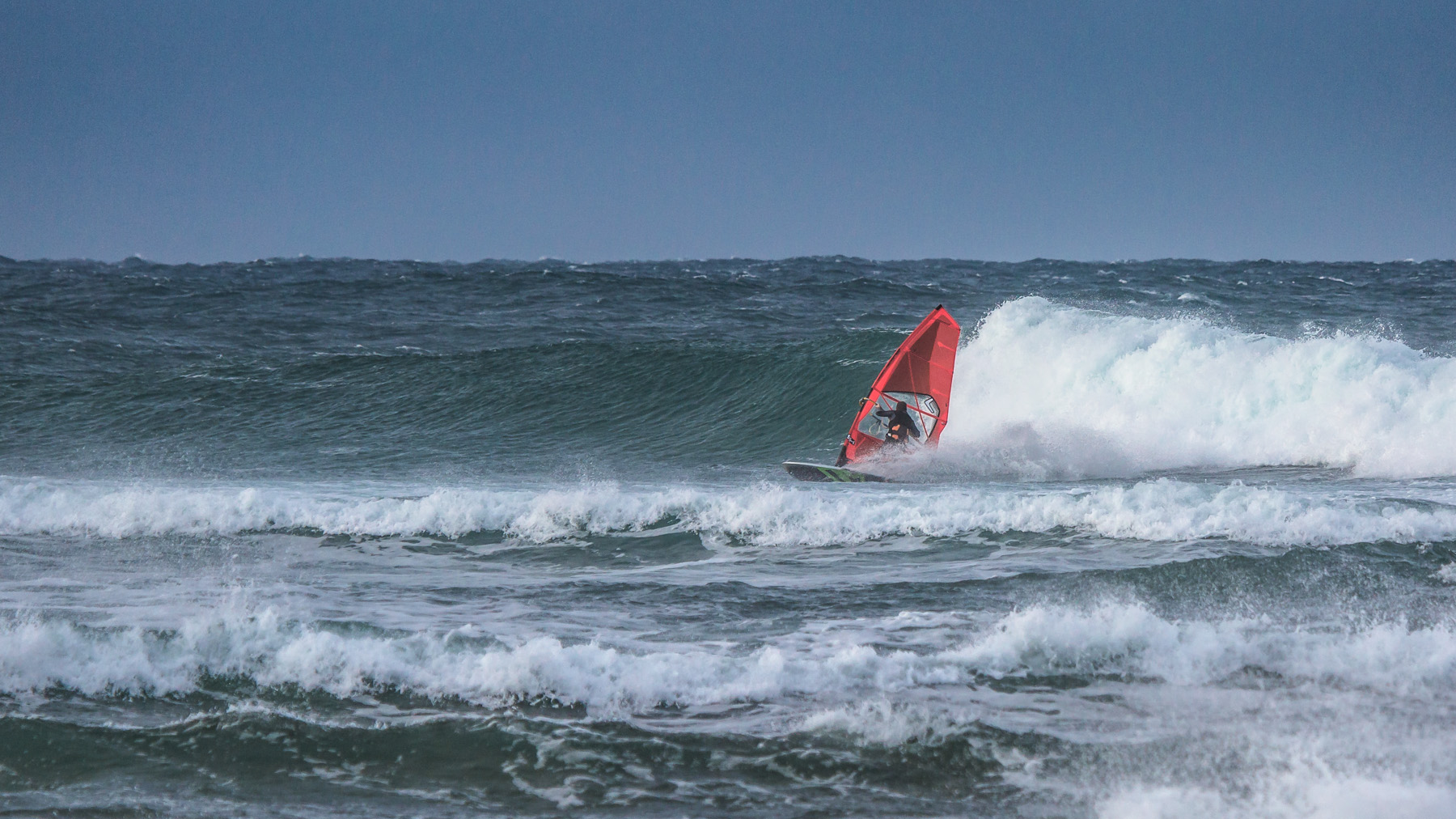 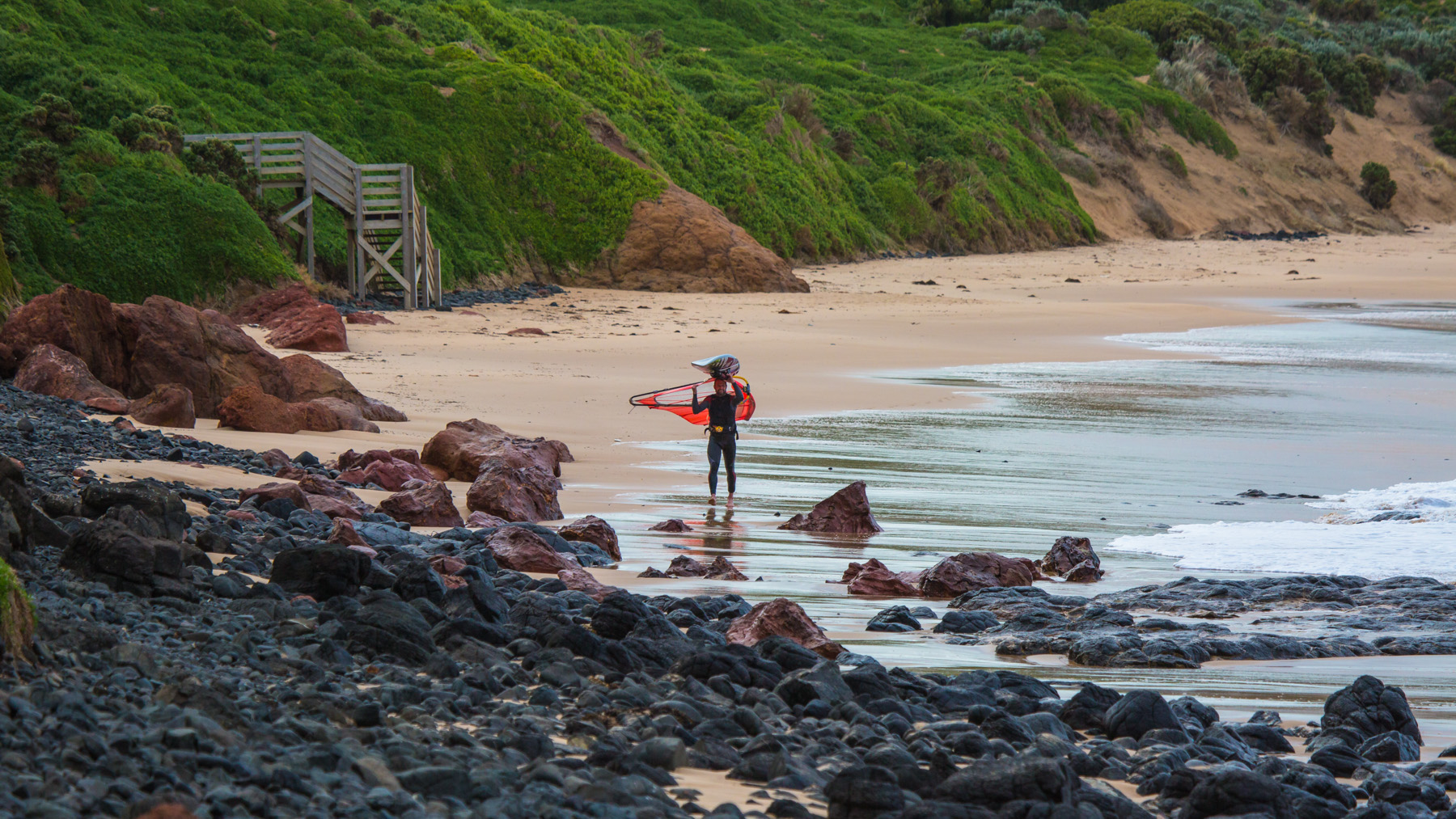 Below: High performance riding at Surfies requires knowledge of the wave, good timing and tight bottom turns to stay in the critical section. 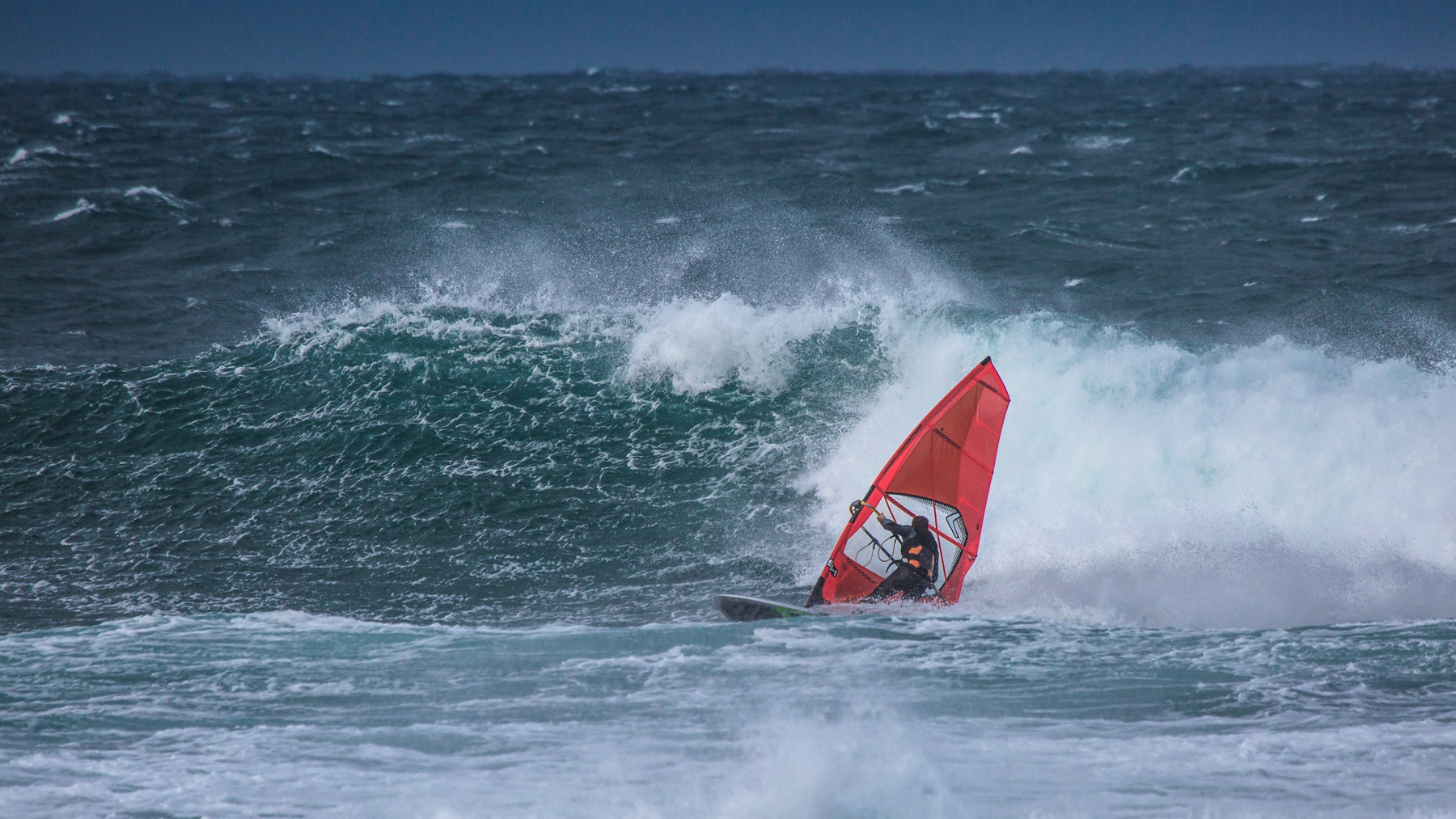 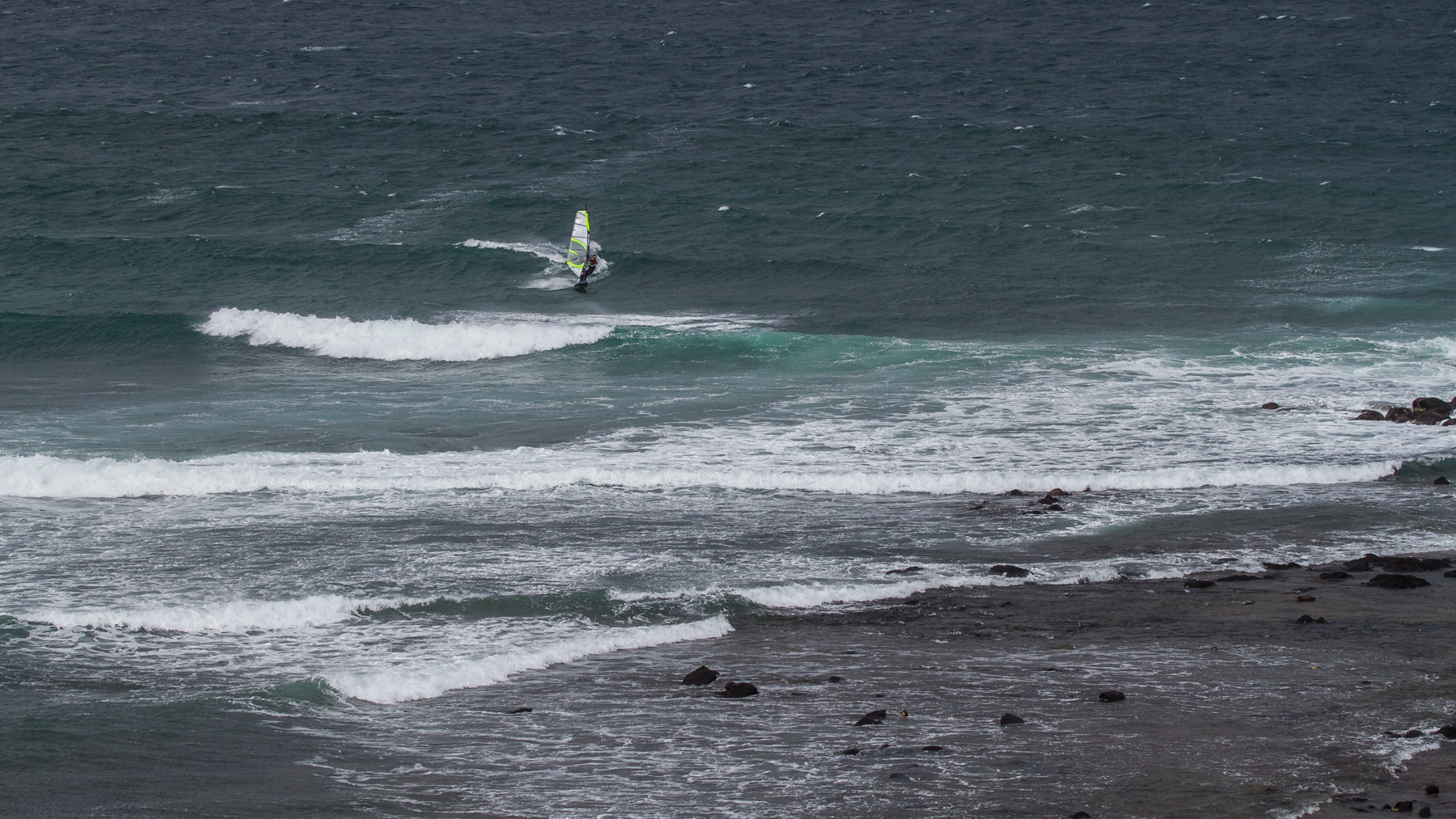 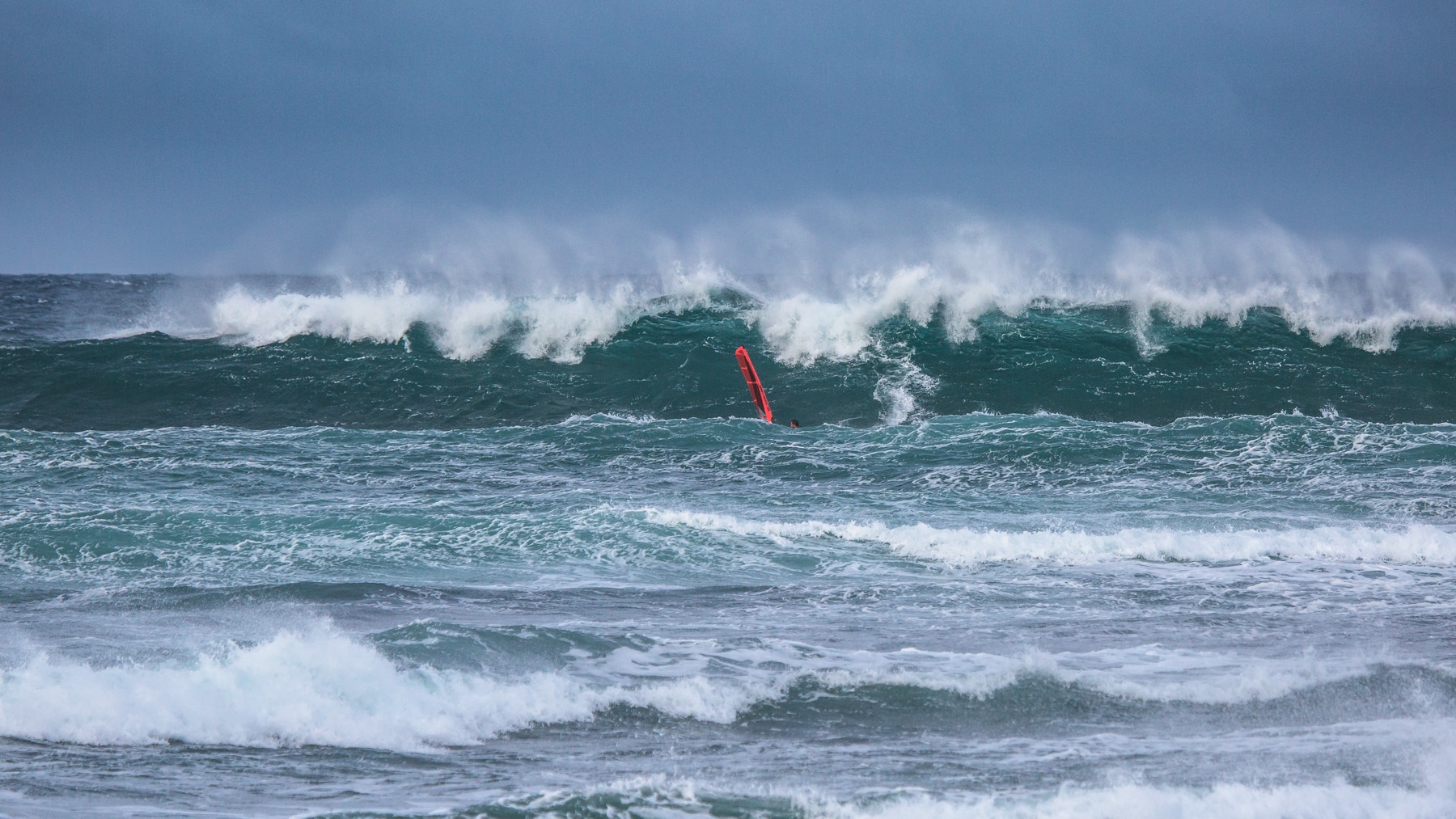 Above:
1. This wide shot shows the inside peak breaking on a moderate wind swell, note the boils in the water in front of the whitewater – the rocks here are shallow.

2. Sets over mast high are common at Surfies on big winter swells and falling on the main peak is likely to destroy equipment.

There are no tricks to figuring out the wind at Surfies – like every other spot that relies on westerly airflow, it is subject to the subtleties of the front as it passes through so make a call based on the live wind readings. Generally you’ll prefer days that forecast a touch of northerly in the direction to guarantee WNW at the break. NW is also great, more for down the line riding than any jumping – and W or WSW are also sailable for cross or cross on jumping conditions.

Surfies picks up a significant amount of swell thanks to the deep water behind the break and a relatively south facing aspect. It is usually a few feet smaller than the open beaches, requiring at least a moderate ground swell (4-5ft) before it becomes a feasible option.

On Phillip Island the area west of Forest Caves heading to Smiths Beach is all very rocky – and Surfies is no exception. Low tide is not recommended. Mid tide is probably the best for overall wave quality, and higher tide gives more leeway to avoid the reef especially on the inside section of the point. The Surfies beach break is often close to flat on low tide, the swell will fill in substantially as the tide rises.

Surfies is suitable for intermediate to advanced riders on typical conditions, and is for experts only on large swells. The wave is similar to Right Point in the sense that it can be easily ridden wide, on the the shoulder to explore the break without any major consequence. Or, it can be ridden by taking off deep on big, heavy sections – meters away from dry rocks for a serious adrenaline rush.

Rocks & Reef
Rocks are a considerable issue at Surfies, how much of an issue depends on the tide and swell size on the day. The main peak stands up behind the rock shelf and breaks over a shallow slab before dropping off into deeper water. Taking off deep on a smaller swell and a low tide is risky. The inside section of the point also has one larger rock that sticks up – be conscious of this and avoid this zone unless the tide is high.

Large, Powerful Waves
Surfies Point consistently breaks at mast to mast and half high on large winter ground swells. At this size it is a serious wave that can cause injury, destroy gear and cause long hold downs. Comparable to Margaret River, the main peak is heavy – but then quickly fades off into deep water and shoulders off. For this reason Surfies is a good place to explore bigger waves and push your limits by taking off towards the shoulder, rather than behind the rock on the main peak.

Surfers
On lighter NW winds and moderate swells expect to share the lineup with some surfers. This becomes less of a problem as the swell gets bigger. If it is over 20 knots or more westerly then the break is usually empty. 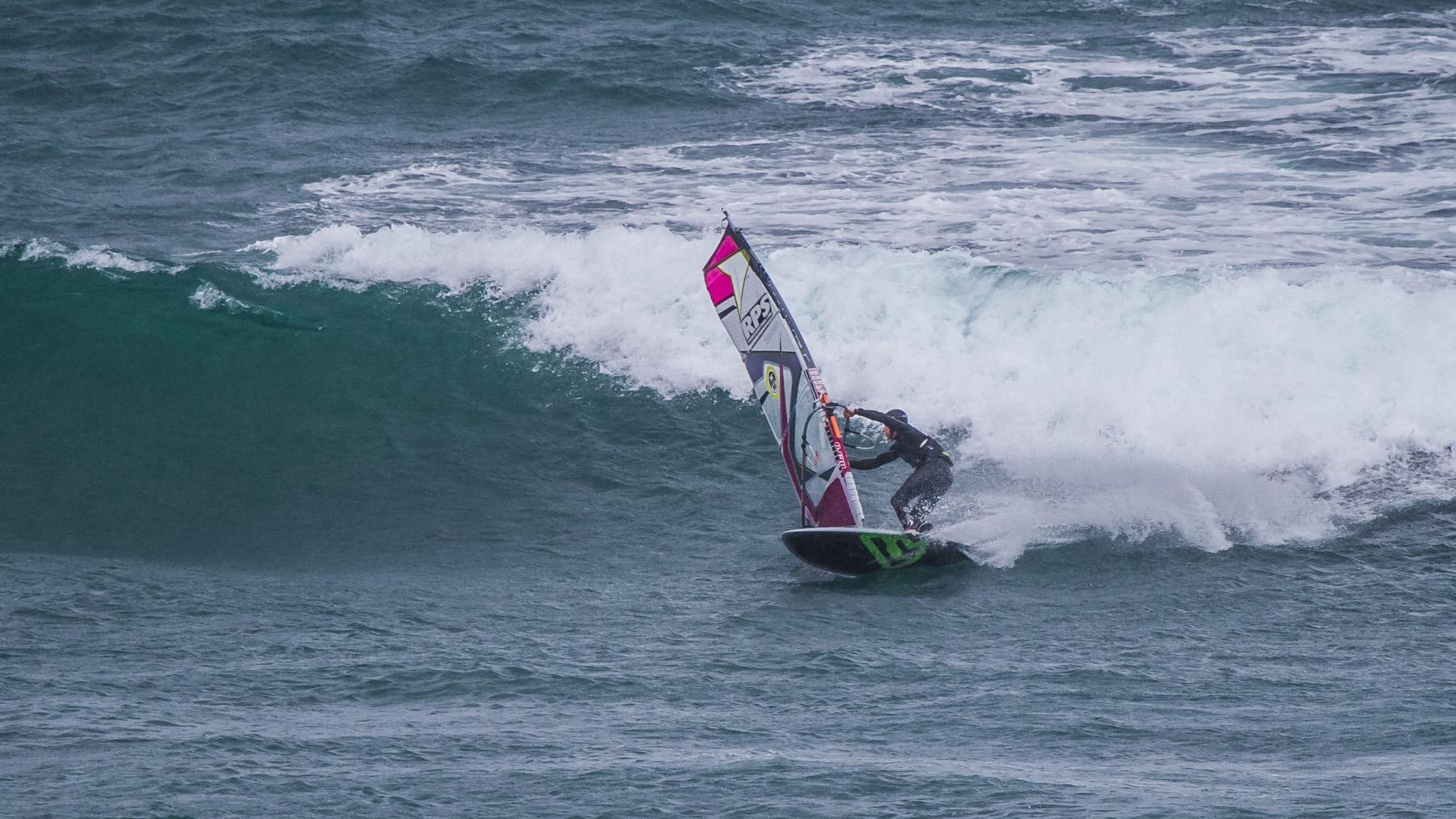 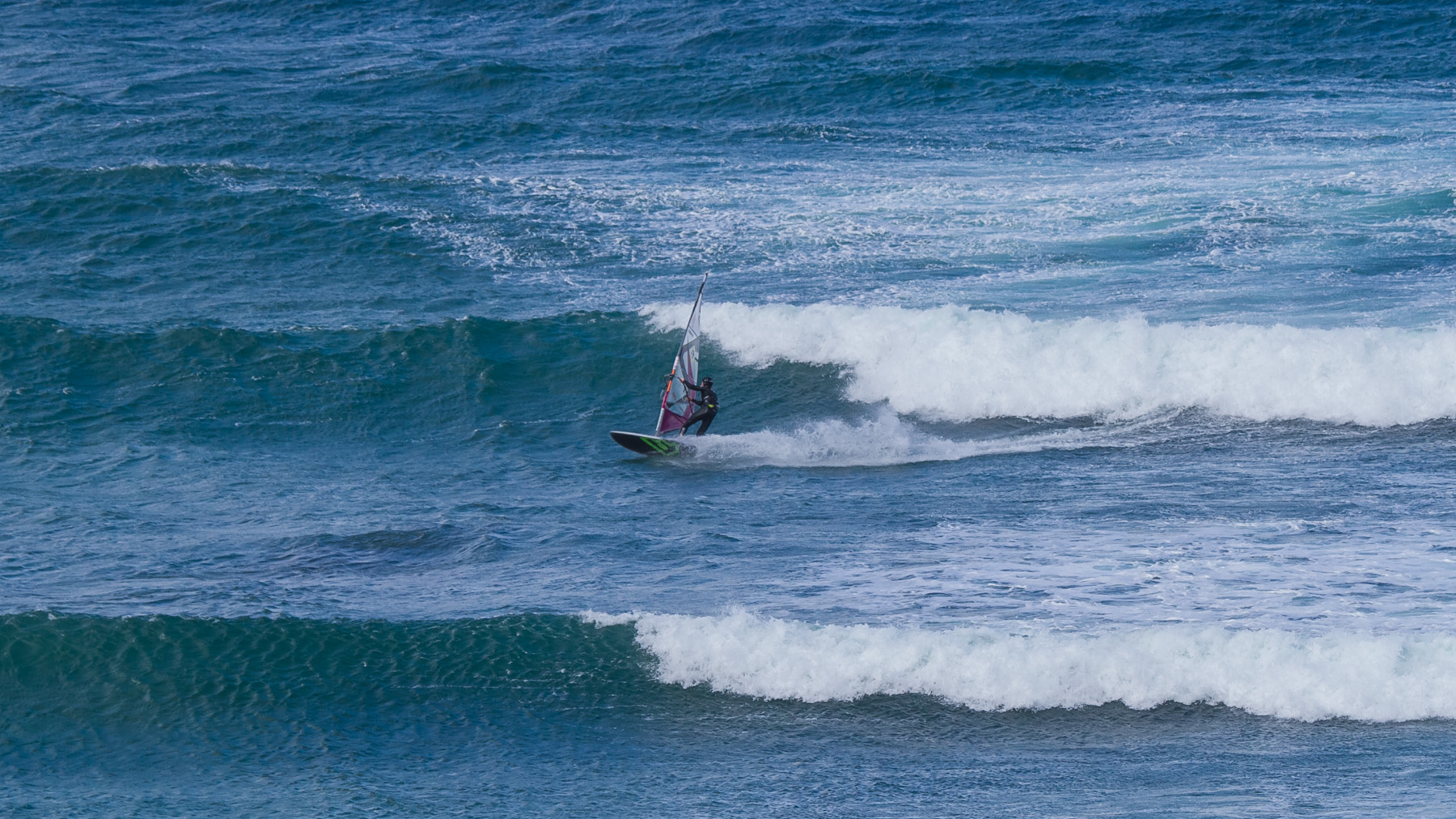 Above:
1. The inside section of the wave at Surfies needs a reasonably big swell to break properly. When it does, it is a mellow right hander that offers crumbly sections and little pockets for foam climbs and cutbacks.

2. A wider shot shows how even waves well over head high through the inside section remain fat and non threatening for sailors to improve their basic wave riding skills. 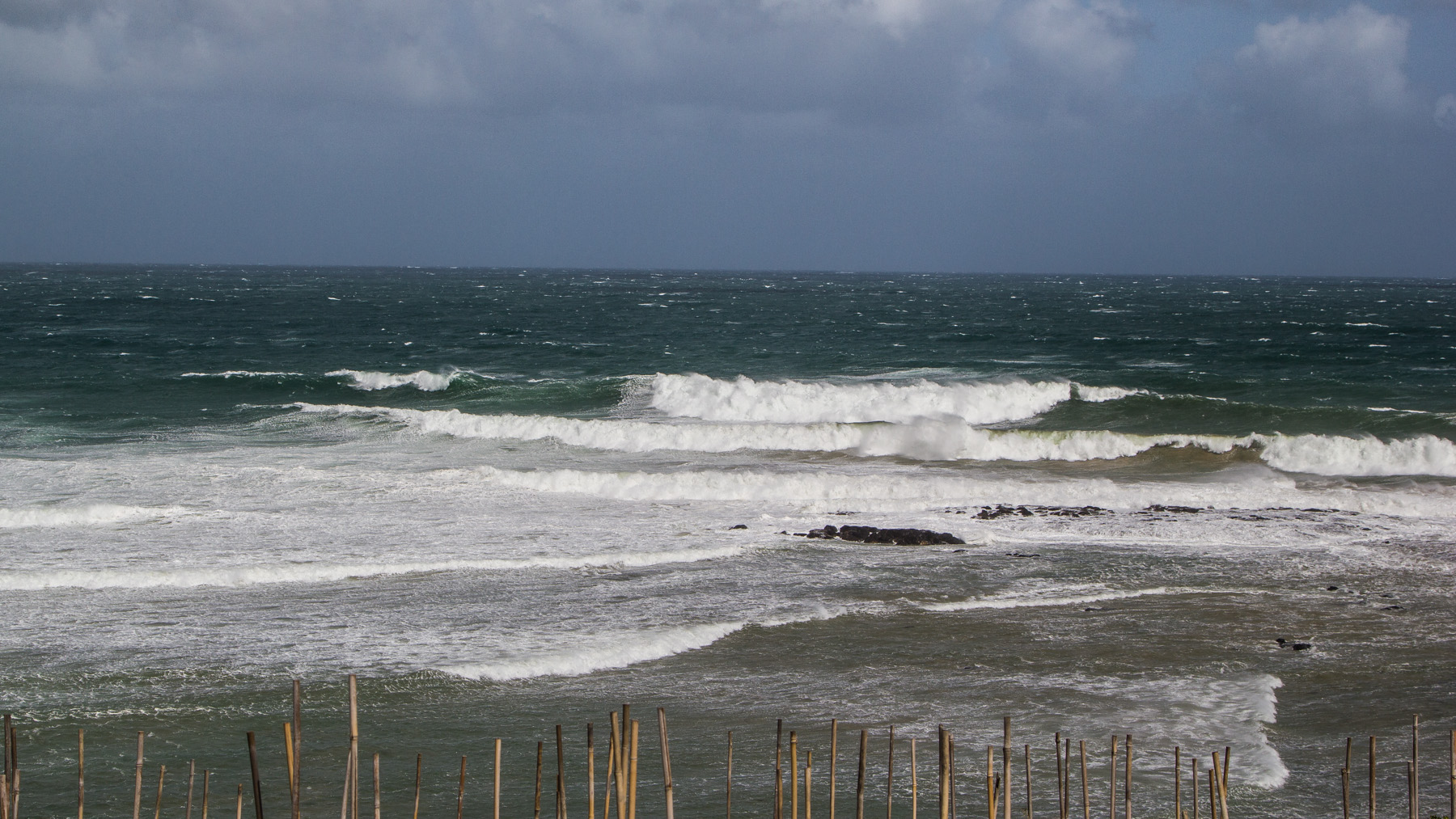 Above: Surfies Point on a large mid period swell, with a strong W-WNW wind blowing cross shore. Note the wide crumbling lip after the first section – these waves are often the best allowing for a rare, steep second hit before kicking out.

Below:
1. The Surfies beachie offers steep ramps for jumping even on small-moderate swell when it is howling W-WNW.

2. The beach break wave is mainly a left, forming on the sand bar next to the permanent rip that runs out along the rocky point. It does offer nice steep sections for hitting the lip and can be more rippable than the point itself on smaller swells. 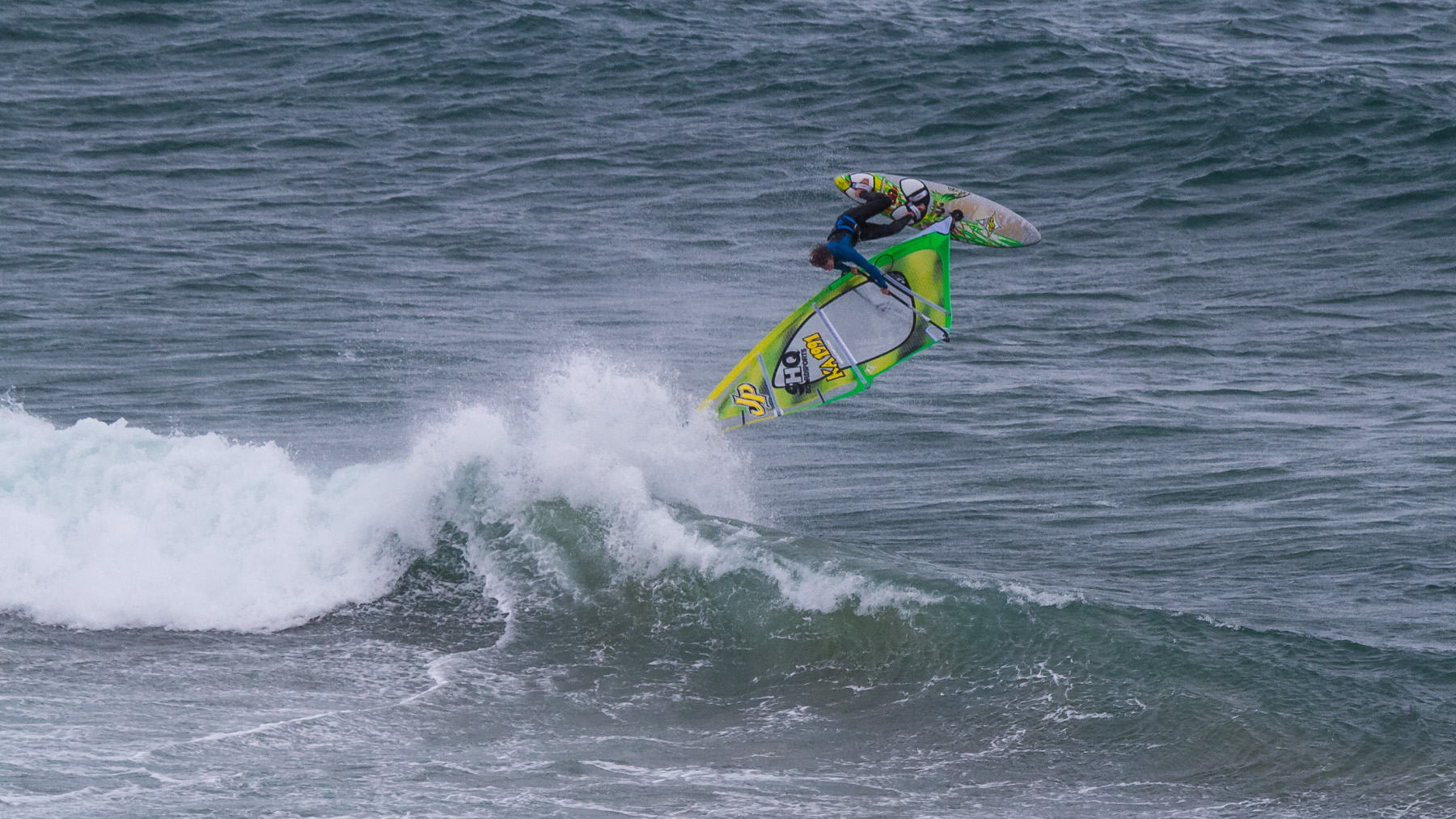 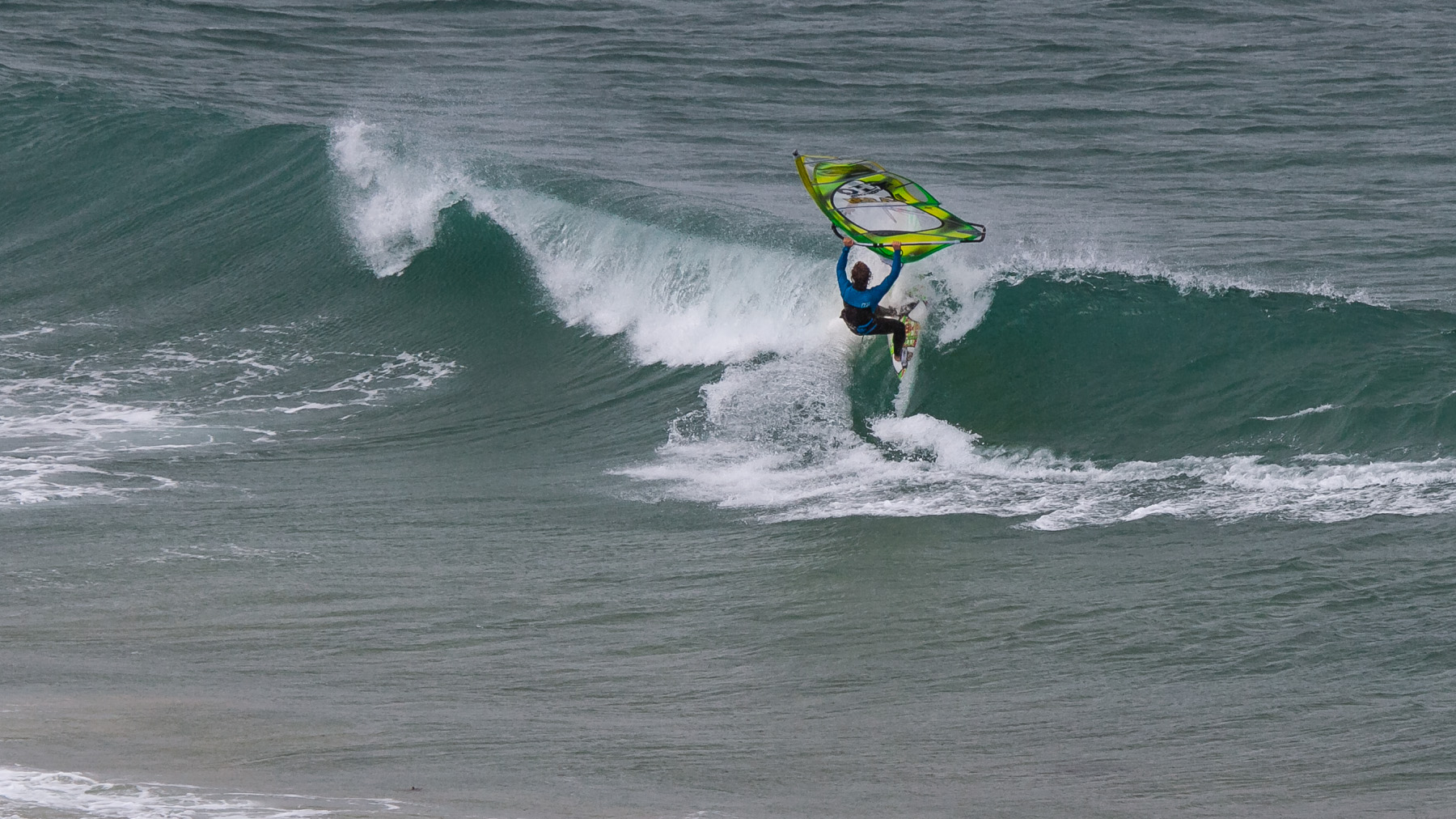 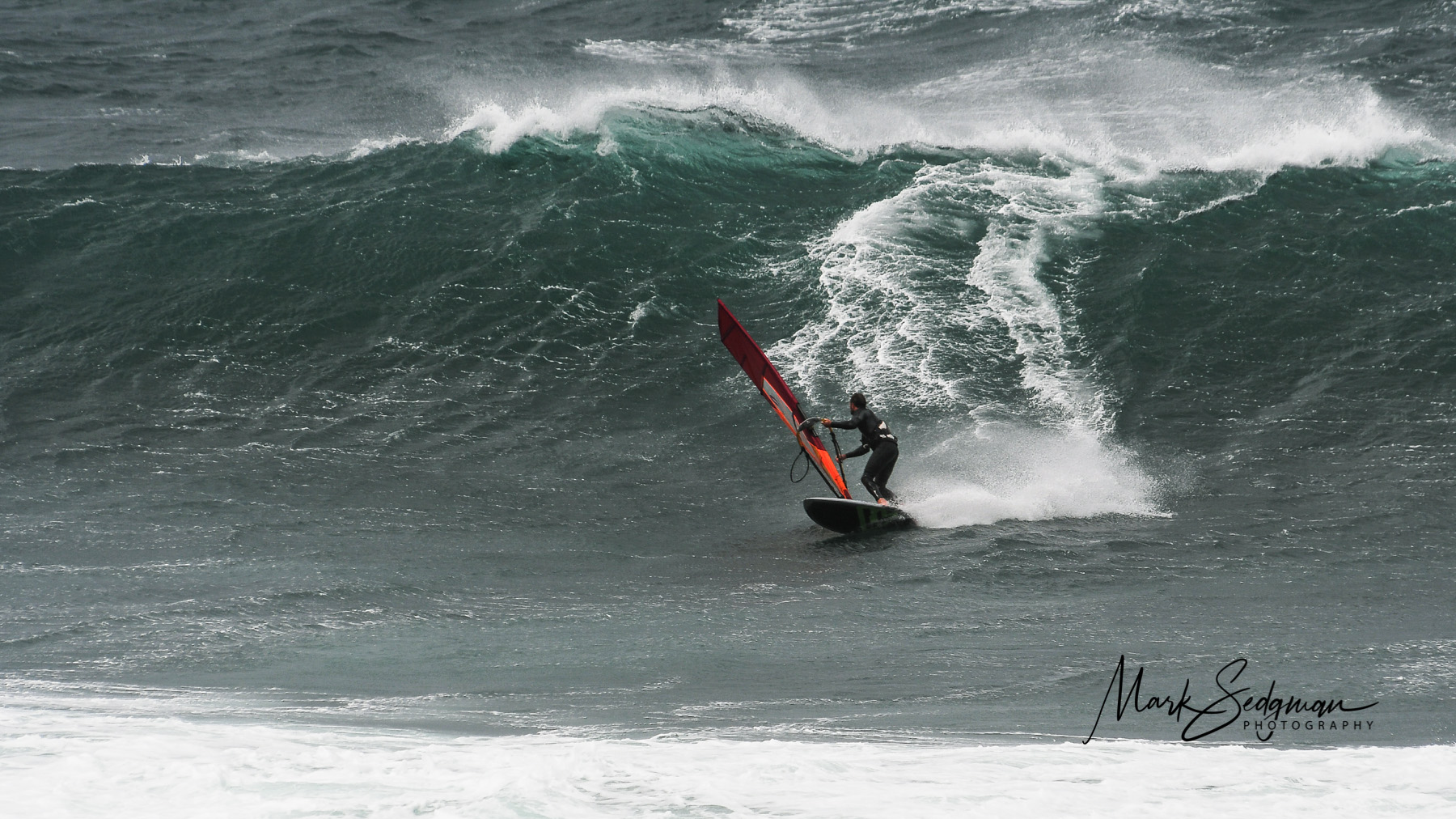 Above: This shot shows just how peaky the point wave can be. A big single peak, with a very narrow critical zone before fading off.

Surfies is consistently sailable through the winter months, and also on any sort of westerly frontal system. These are always a little unpredictable with the wind often oscillating between the W-NW or the W-SW – rarely sitting at true W.

Strength is normally not an issue except on light-moderate NW breezes which can be gusty due to the wind coming off the cliffs around Sunderland Bay.

Check the swell forecast on Swellnet for the open beaches here, and for Surfies Point itself here. The daily Swellnet Phillip Island surf reports are actually for Surfies so are a good indication of wave quality.

Check live readings from Pt Nepean Swell Buoy here. Surfies Point is sensitive to swell quality, low period swells tend to be broken up and fat but can offer good jumping. Wave riding is unlikely to be good unless the swell is at least 2m average with a solid period.

The closest live wind readings to Surfies Point are Rhyll and Cerberus.

Rhyll and Cerberus generally understate wind strength and are more useful for understanding direction. Use South Channel Island to estimate wind strength on the water at Surfies – it is usually similar, but sometimes slightly less too.