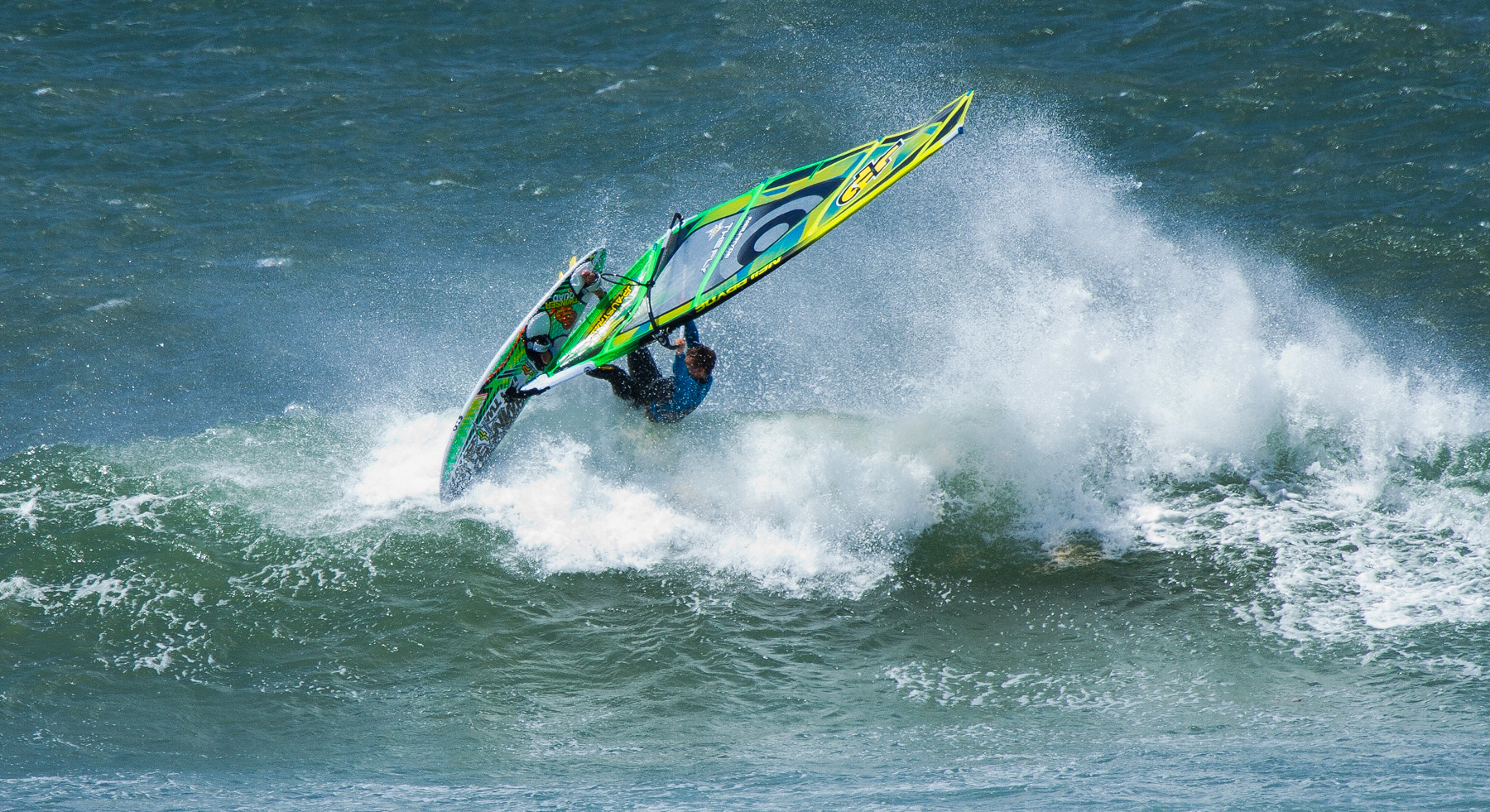 Point Impossible or ‘Possos’ is probably the most commonly sailed spot for down the line conditions on the Surf Coast. It can be excellent when a condition align, but is a notoriously fickle break with unpredictable and gusty wind. Nonethless it is a Victorian classic, and worth trying to score for any Victorian wavesailor with a decent grasp on the basics (conditions permitting).

Most wavesailors will ride the outer ‘2nd reef’ – a sectional, wall with a usually thin or crumbly lip. The inside point is popular with surfers, but can also be good for sailing if the wind swings more to the south and break is empty.

Possos is definitely better on lower tides or bigger swells. High tide and small swell can make the wave almost completely flat – and on bigger swells the wave is fatter with the added hazard of the rocky cliff shoreline. If the wind direction isn’t cooperating, try Point Danger, 13th Beach or Poo Point as alternatives.

25 knot+ W-WSW wind, low-mid tide and a powerful ground swell for long down the line rides. 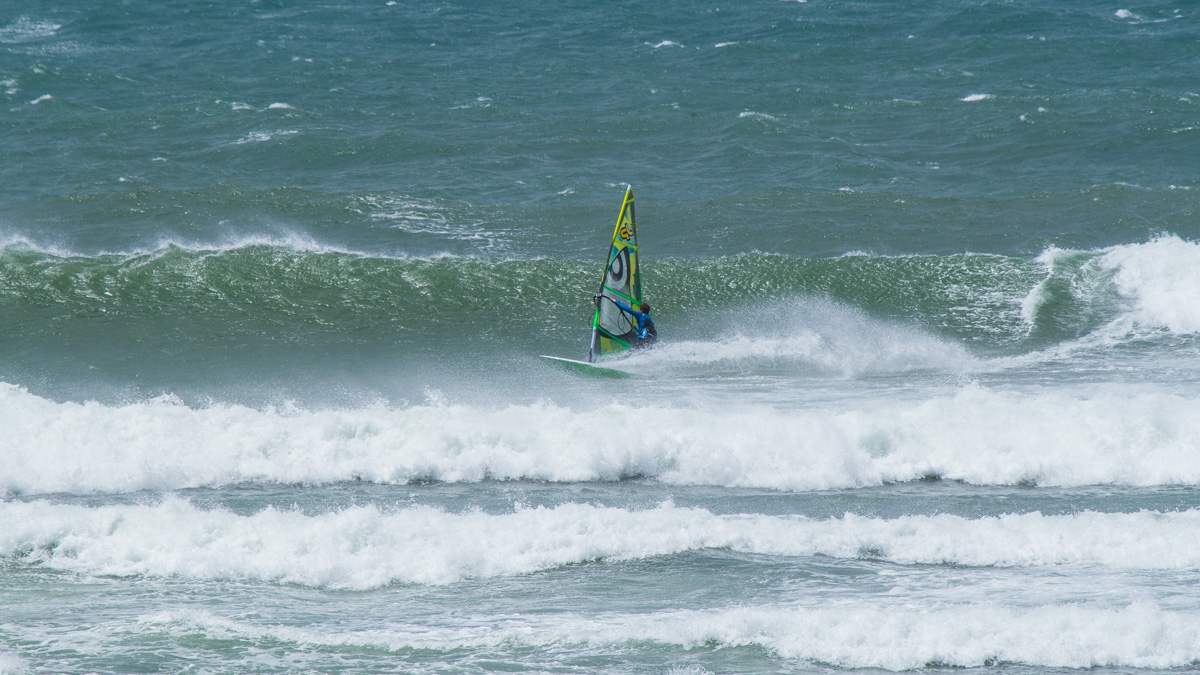 Above: Possos is a challenging wave to ride well – sections often tend to feather down the line but back off instead of throwing out. Nonethless it is popular with the local Surf Coast crew and Melbourne sailors alike. Local riders have the advantage given the shifty nature of the wave.

Below: 3-4ft waves with the odd bigger one are typical for the average session at Possos. The waves can be a bit punchier than Poo Point, especially on low tide or with a long period swell. 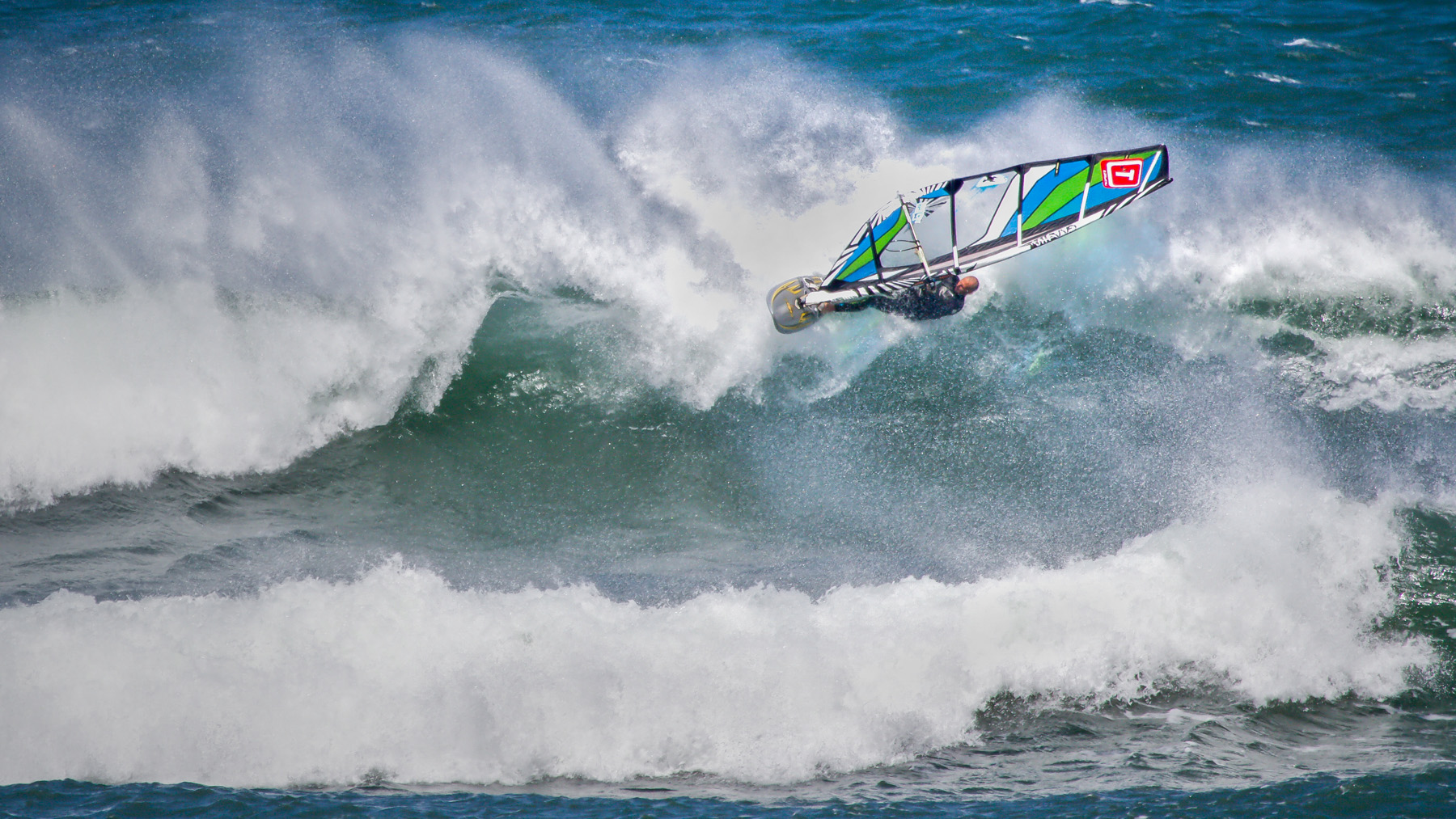 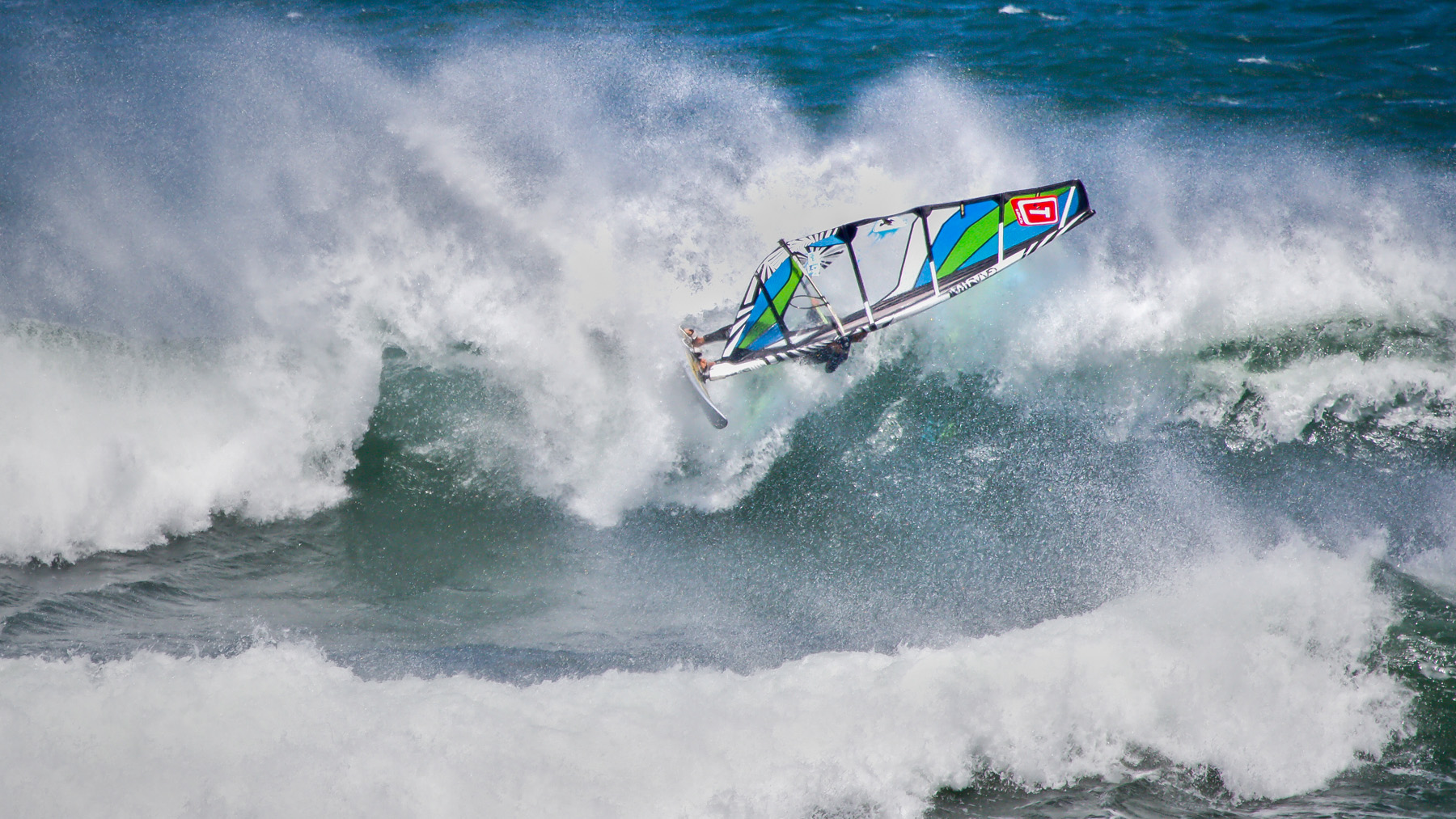 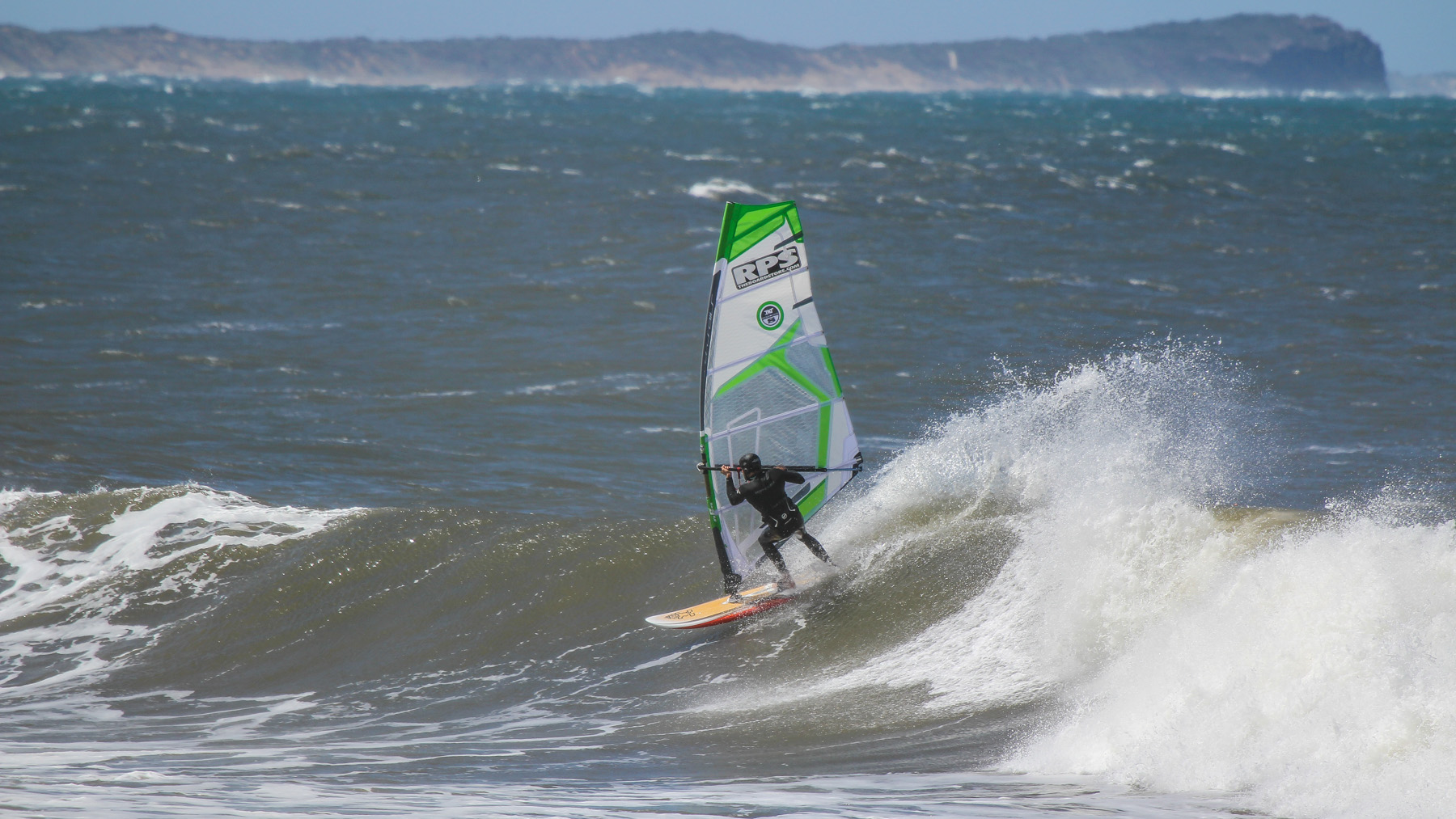 Above: The inside point is usually packed with surfers, even when it is windy. On days where the outer reef is suffering from a slightly too southerly wind, the inside point can be great for windsurfing if there aren’t many other people in the water.

Below: A small-moderate swell on the outer reef typically offers shifty waves with steeper, stretched out sections on the good ones, or short peaks with tight shoulder sections. 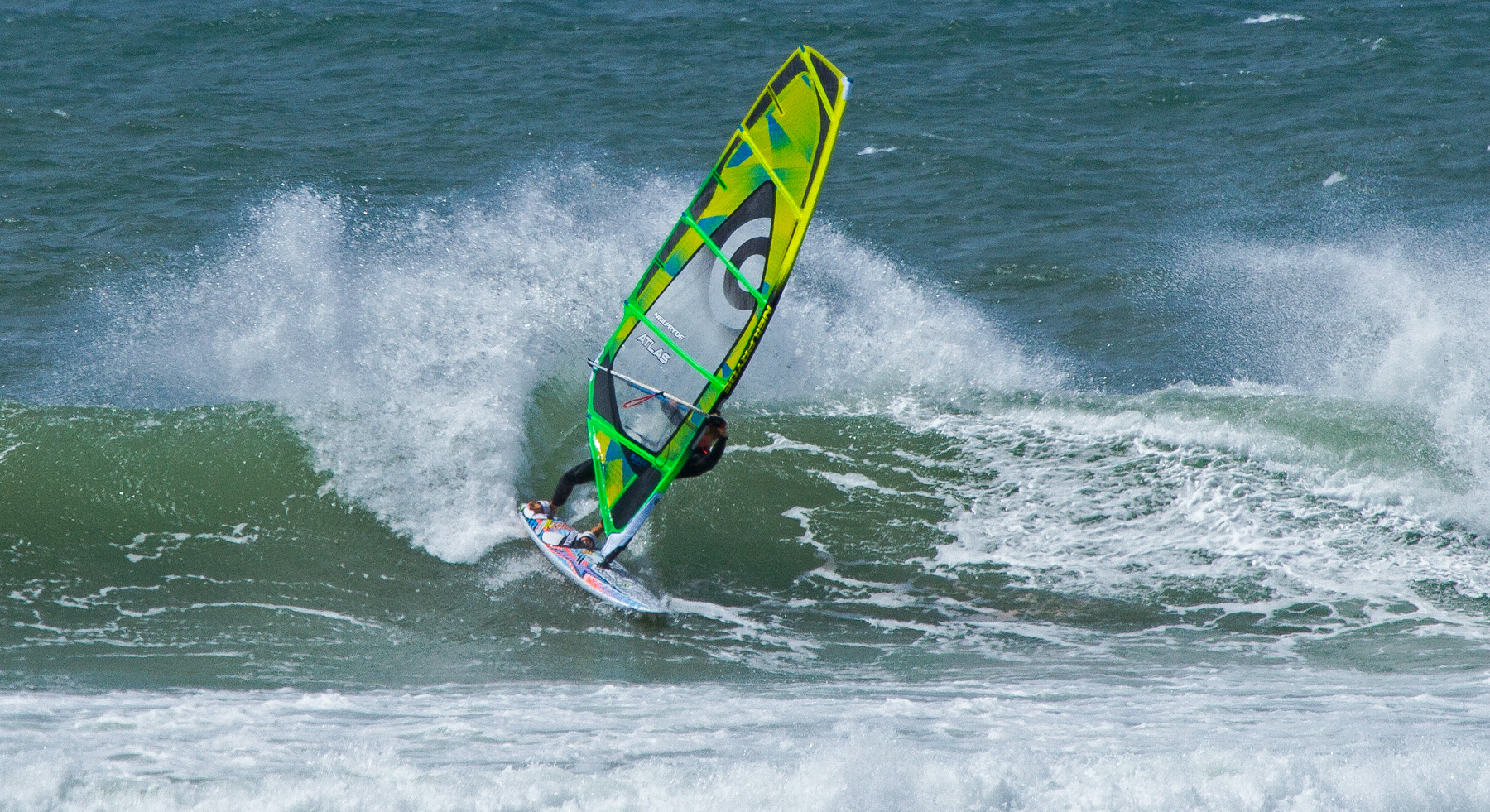 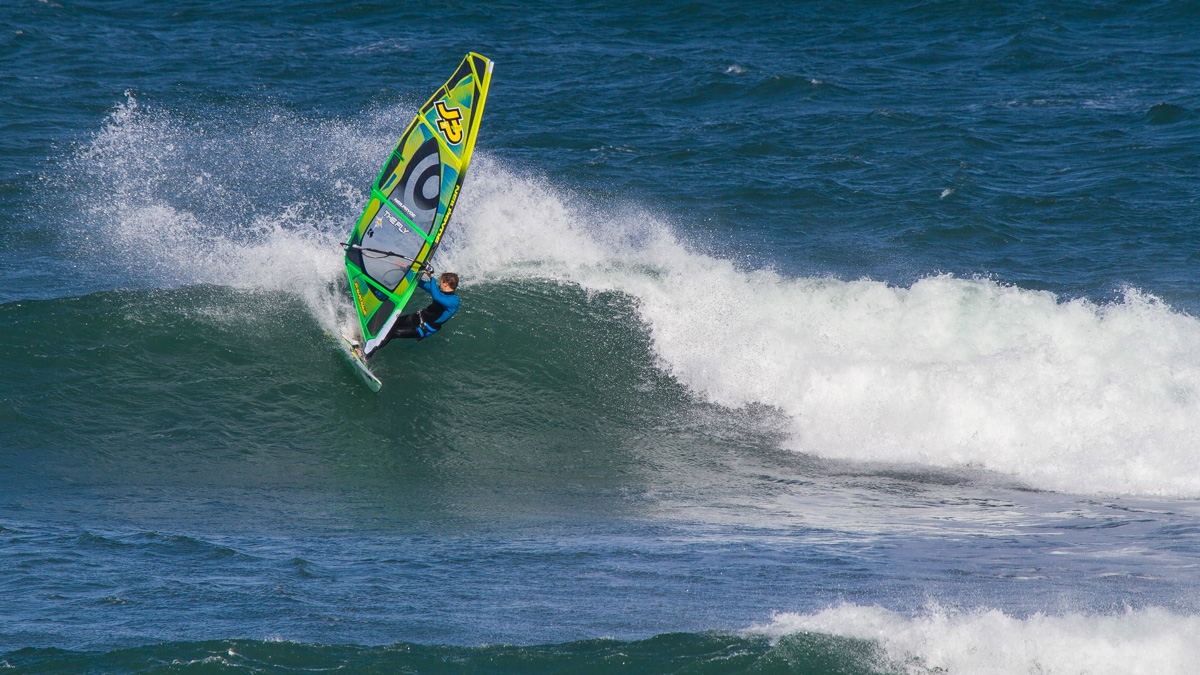 W-WSW is needed for classic Point Impossible. SW is slightly onshore on the outer reef making down the line riding difficult – the inside point is cross shore on this direction. Any north in the wind makes it extremely offshore and gusty – go to 13th Beach or Poo Point instead.

Possos requires a solid swell to start working, and will continue to break even on the biggest winter swells. Generally the outer reef is roughly half the size of Bells Beach, and the inside point a bit smaller again. Any smaller than a 3ft forecast for Torquay and Possos is not going to have a lot going on. A 6ft Torquay forecast should see head to logo high waves at Possos.

Tide is critical for a good session at Point Impossible, low-mid tide offers better wave quality and removes the main hazard of the break – the rocky beach between the point and the reef that becomes dangerous on high tide.

Possos is not a heavy wave except on the absolute biggest swells – and even then lacks the raw grunt of somewhere like Surfies Point. It is a good spot for inexperienced wavesailors on low tide, small swells and strong wind. On big swells navigating the break is challenging due to the general fluky nature of the wind and is best left to experienced riders.

Dangerous Rock Beach
The beach upwind of the point heading towards the outer reef is full of sharp, uneven rocks with plenty of holes to catch unsuspecting legs. This becomes dangerous on high tides and large swells where breaking waves smash against the cliff. There is no safe zone and it easy to get trapped between sketchy rocks, a cliff and breaking waves. Always either come in upwind and walk back over the sand dunes on high tide, or go all the way downwind to the creek mouth.

Fluky Wind
The wind at Point Impossible is notoriously fickle, often coming in slightly too south or holding a little too offshore. The wind frequently swirls around and goes up and down with the passing of local fronts. Getting completely skunked is fairly common, so be prepared for a swim in and plan out how you will get back to shore in no wind and a solid swell.

Surfers
Most surfers will ride the inside point on a W-SW wind, and most windsurfers stick out the back on the reef so everyone can mind their own business. Occasionally though some surfers will be out on the outer reef – this wave is not that easy to surf due to the shifting peaks and spread out sections. If the wind is light, respect them and let some waves through. When the wind is cranking, the surfers should realistically be somewhere else. 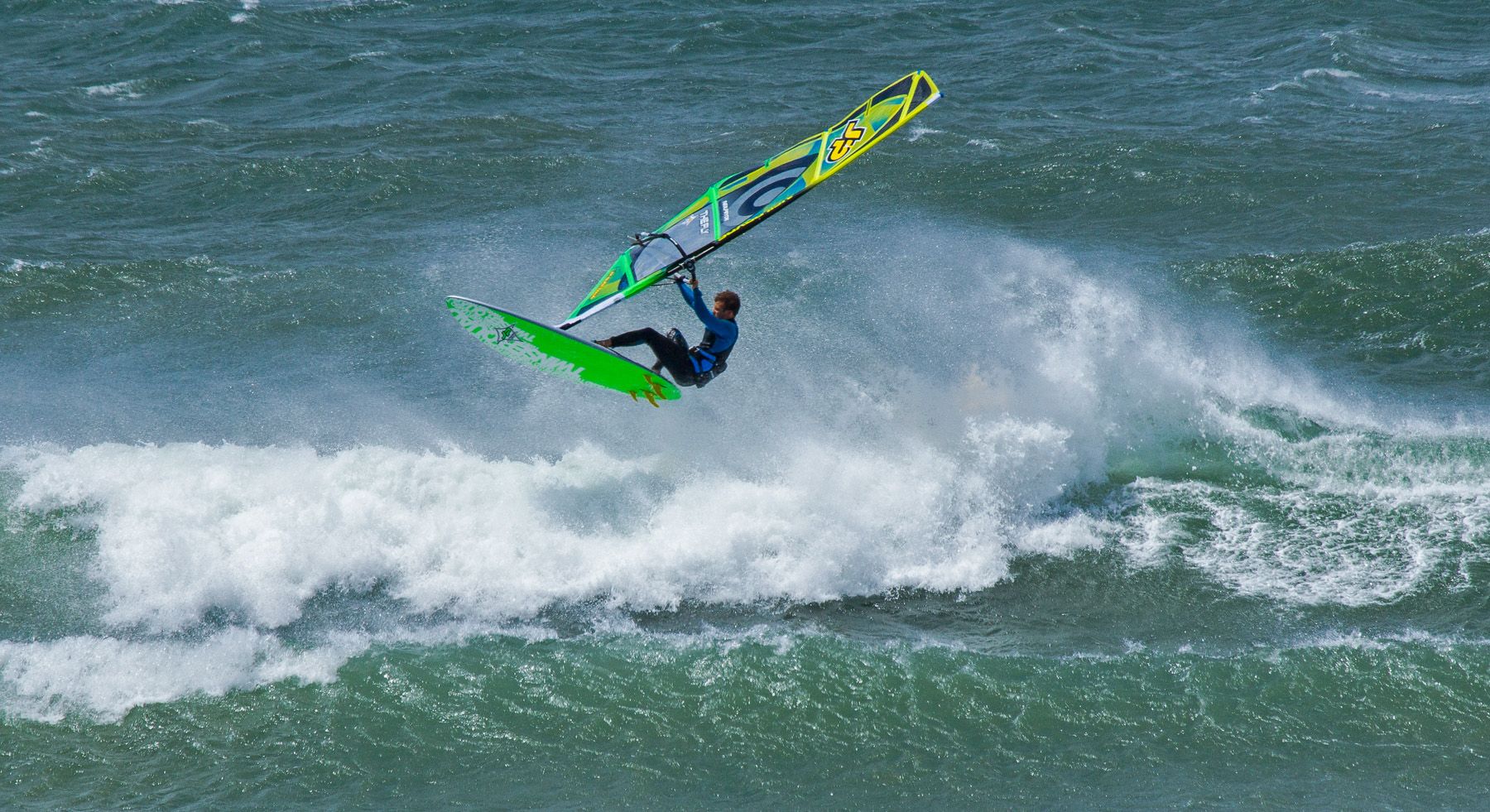 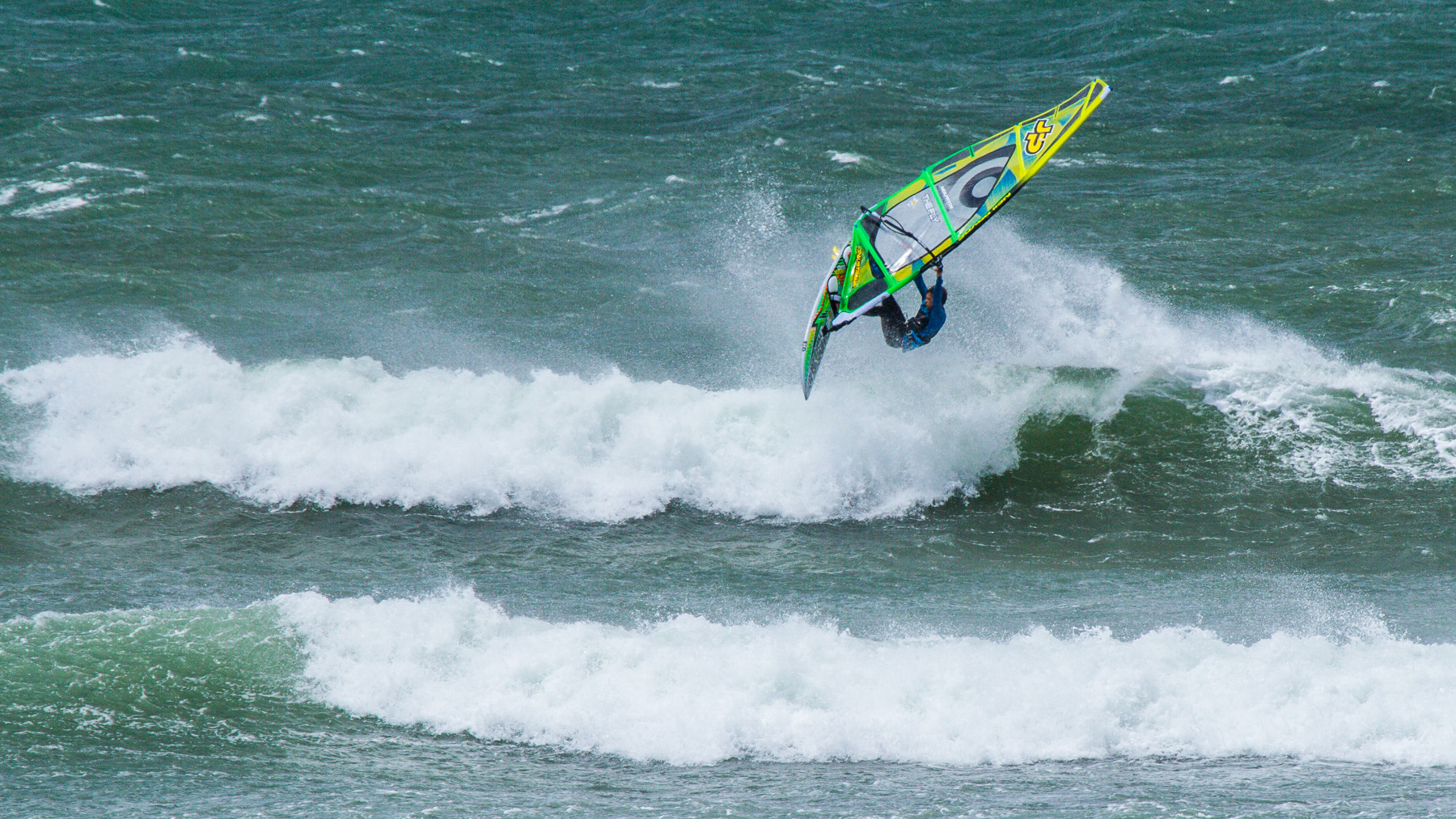 Above: Small days at Point Impossible are shifty, soft peaks that are non-threatening for inexperienced riders and offer a playful skatepark-style setup for advanced riders.

1. WSW wind with a weak wind swell means soft, broken up peaks scattered over the reef.

2. W wind with a large, long period ground swell. Big walls racing from the outer reef and connecting with the point wave if you are fast enough to make the section. 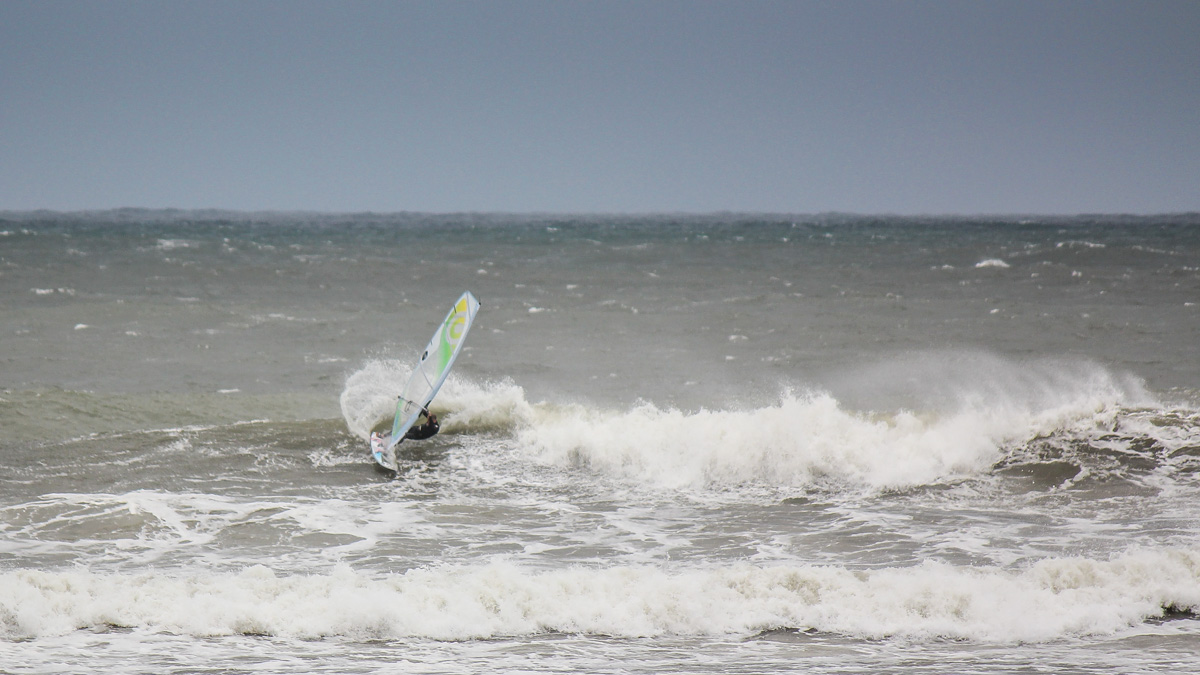 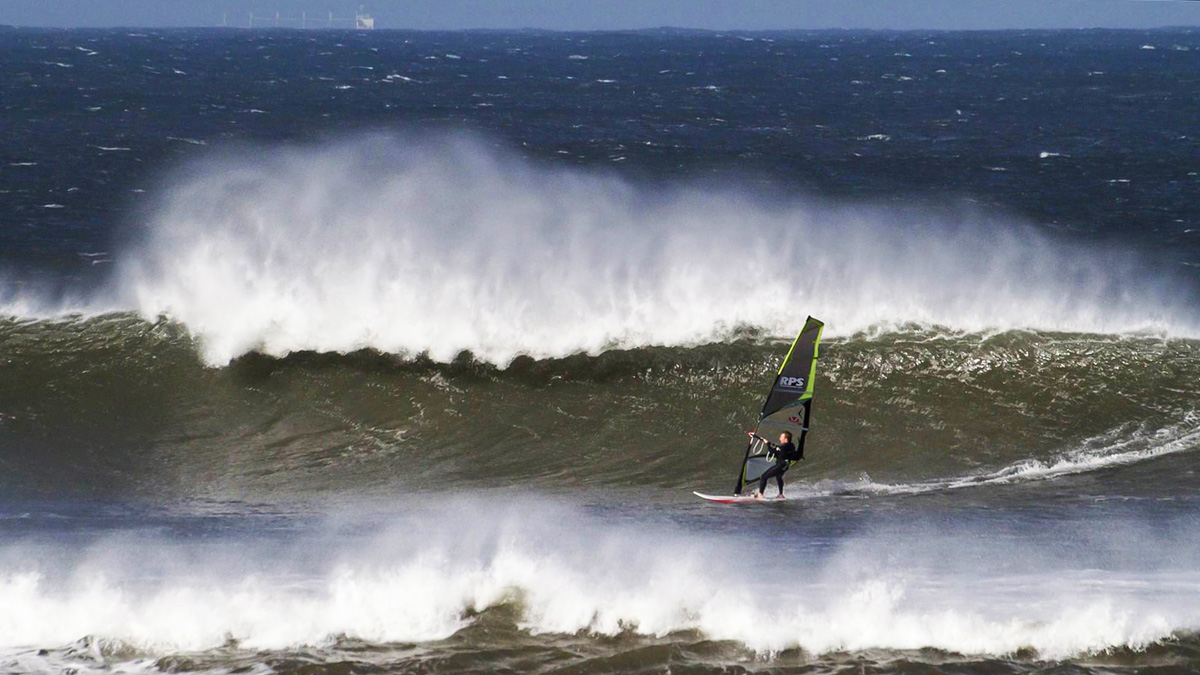 Possos relies on westerly frontal systems which can happen all year around, but are most frequent in the winter months. The wind on the Surf Coast is notoriously fickle, with huge 30-40 knot forecasts sometimes delivering barely anything depending on how the front shifts – which will also flick the wind more offshore or onshore than you had expected. For this reason it is always a good idea to be flexible and try another spot based on what it is doing, not what you think it will do.

Check live readings from Pt Nepean Swell Buoy here. For Possos a 2m average swell height with a decent period would normally break at 2-3ft on the outer reef. A little bigger is preferred to see the wave lining up on the reef properly. Exceptionally large swells, where the Bells area is reported at 8ft+ should see sets at Possos in the 5-6ft range.

The best live readings for Point Impossible are Aireys Inlet and South Channel Island. Cape Otway can be useful to track a front moving in too.

South Channel is generally going to be stronger than the wind on the water at any Surf Coast spot. The true wind strength is usually somewhere between the readings on South Channel and Aireys Inlet. Due to the local wind effects which tend to the keep the wind on a westerly system hanging to the north longer than forecasted, Aireys is also more useful for determining the real wind direction. 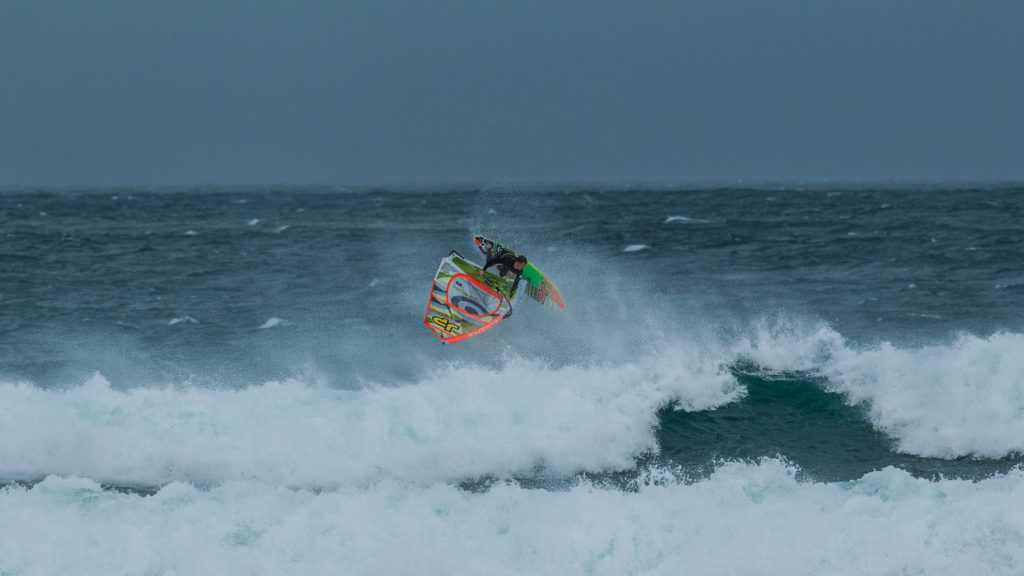 A quick session back in Victoria with some normal sized waves after last week's adventures in Tasmania! Poo Point is [...]