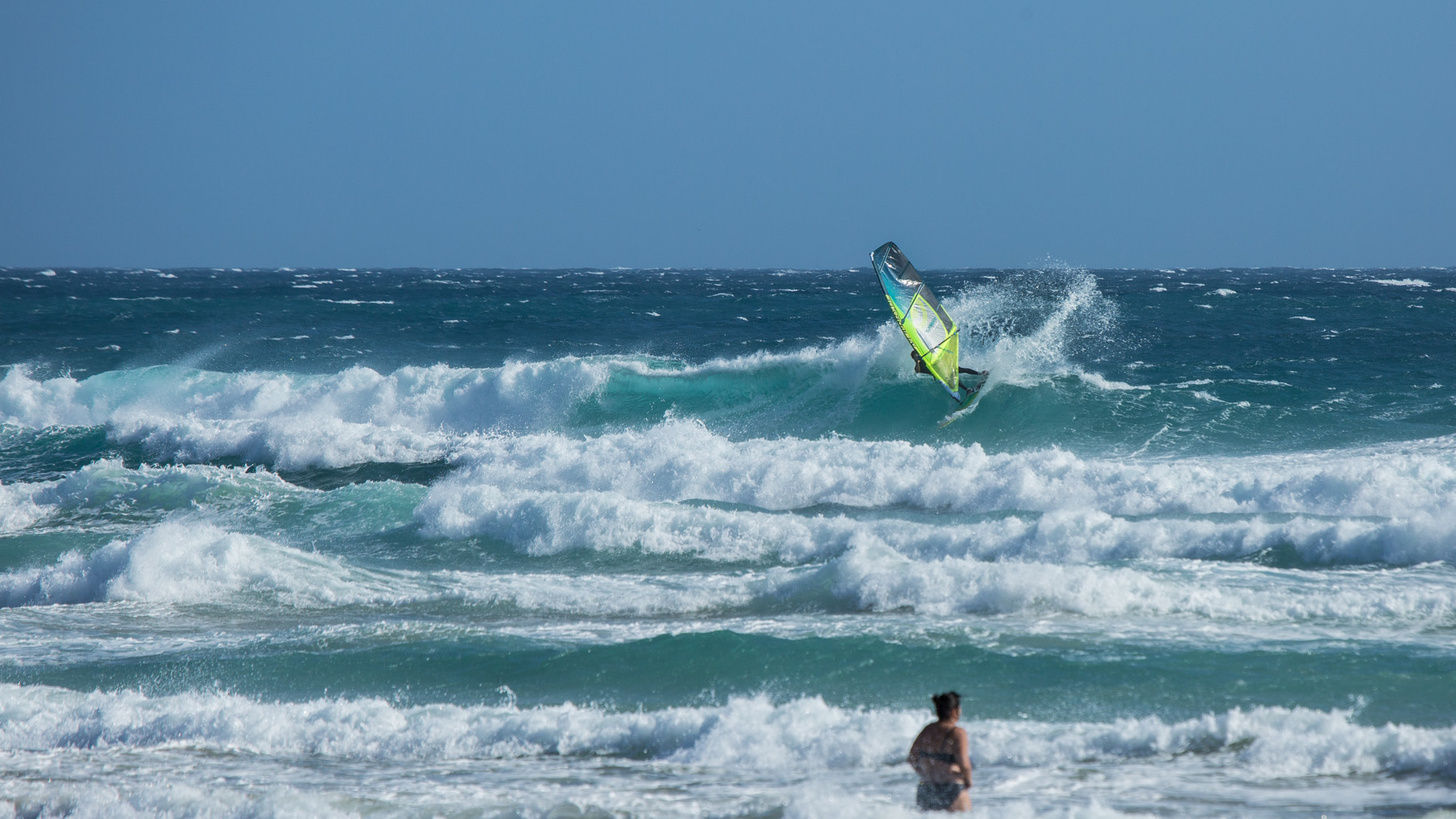 Gunnamatta is the closest summertime wavesailing spot to Melbourne, working in E-SE wind patterns and small to medium sized swells.

Working on the same conditions as Woolamai, Gunnamatta can be considered its slightly wilder cousin with the same powerful bomb sets and strong currents, but with extra rocks and generally choppier surface conditions due to the longer fetch between Cape Schanck and Gunnamatta.

On its day Gunnamatta delivers excellent down the line wave riding, comparable to the famous beach breaks on WA’s South Coast. Gunna is for experienced riders only when the swell picks up – even small days can see rogue sets two or three times the average size. Getting caught in the impact zone by a big set can easily destroy equipment and lead to long tiresome swims.

Gunnamatta is a big beach, with two carparks. Most people windsurf at the second carpark, where the beach is longer and gives a greater choice of banks. The only rocks on this section of beach extend out slightly west of the lookout from the second carpark, there is a semi-permanent rip running along these rocks. The first carpark has a lot more reef and rocks but often can have a very good left and right breaking at the west end of the beach towards Boag Rocks.

If Gunna looks out of your league after checking it out – consider Big Left at Flinders as a backup option. 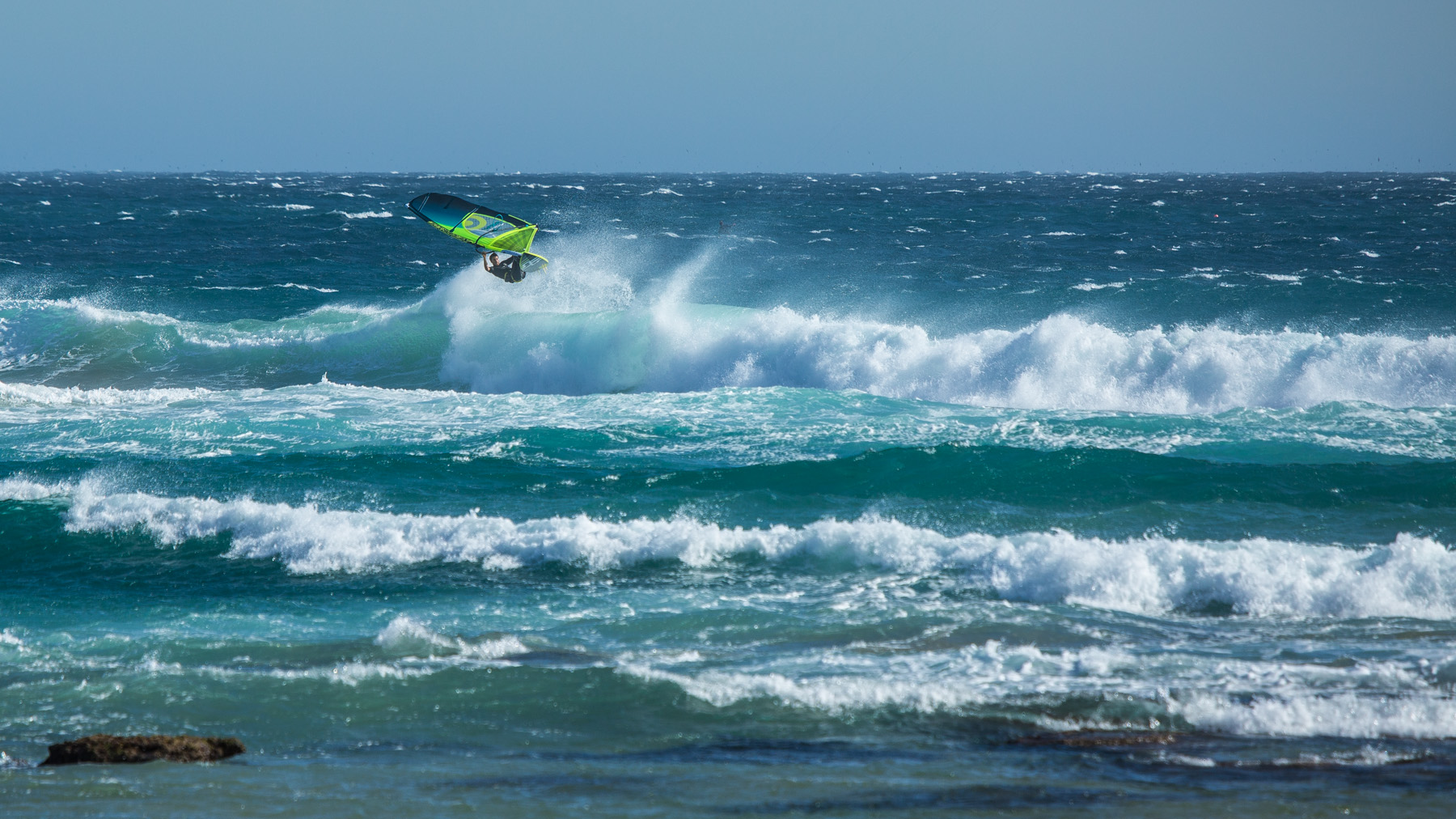 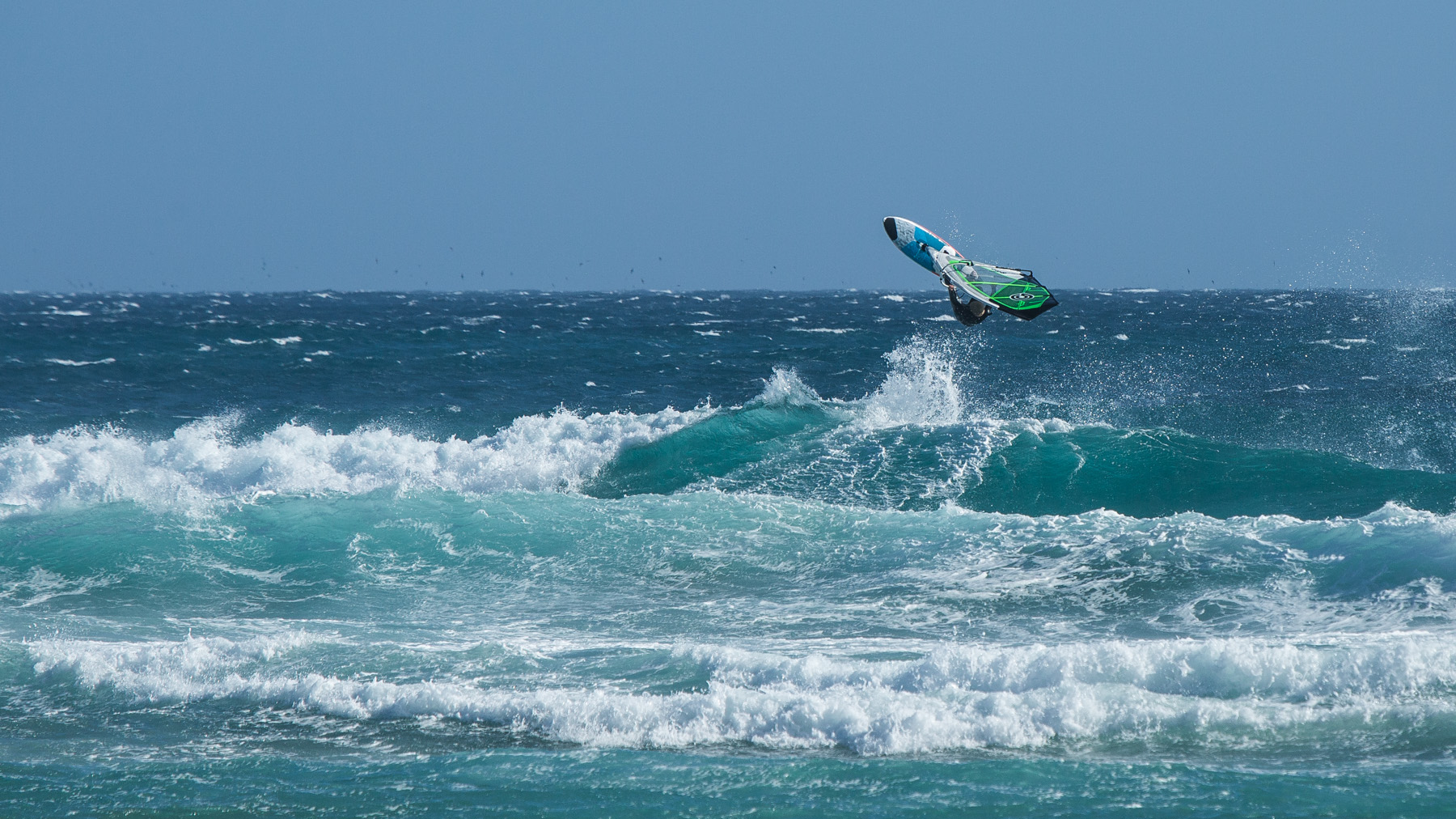 Above:
1. On windy days you can make the most of whatever swell is out there, even if the sand banks aren’t perfect.

2. Strong E-SE can be good for jumping, with decent run ups through the rips before hitting the steep breaking waves. 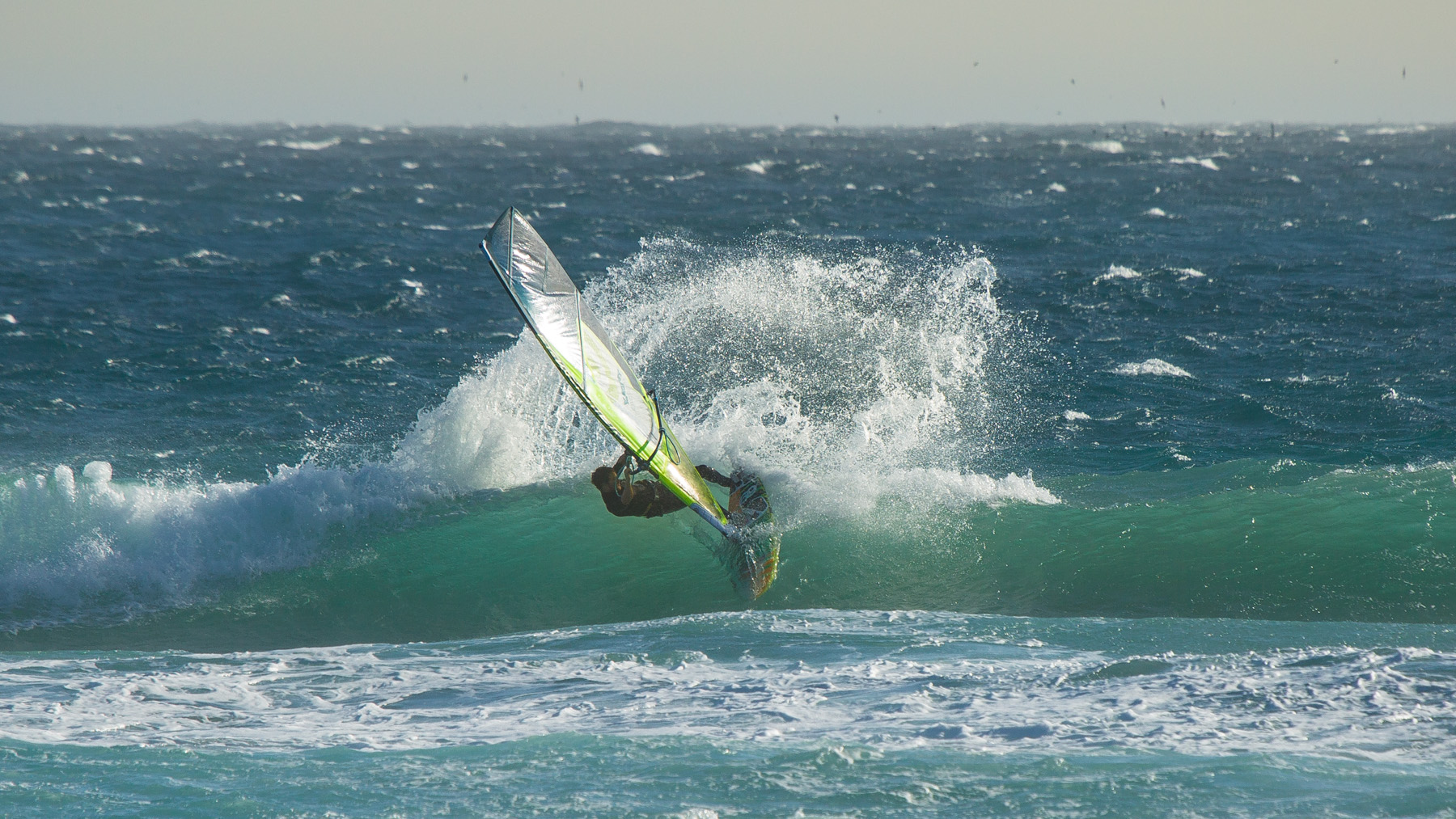 Above: The steeper, more powerful sections at Gunnamatta and Woolamai offer plenty of opportunity for big hacks compared to somewhere like Sandy Point.

Below:
1. Timing is critical at Gunna – being late gets you shut down by heavy sections. If the wind is light, this means running the gauntlet through rogue sets in the impact zone to get back out.

2. Surf style positioning is rewarded with smooth, steep sections to rip into. 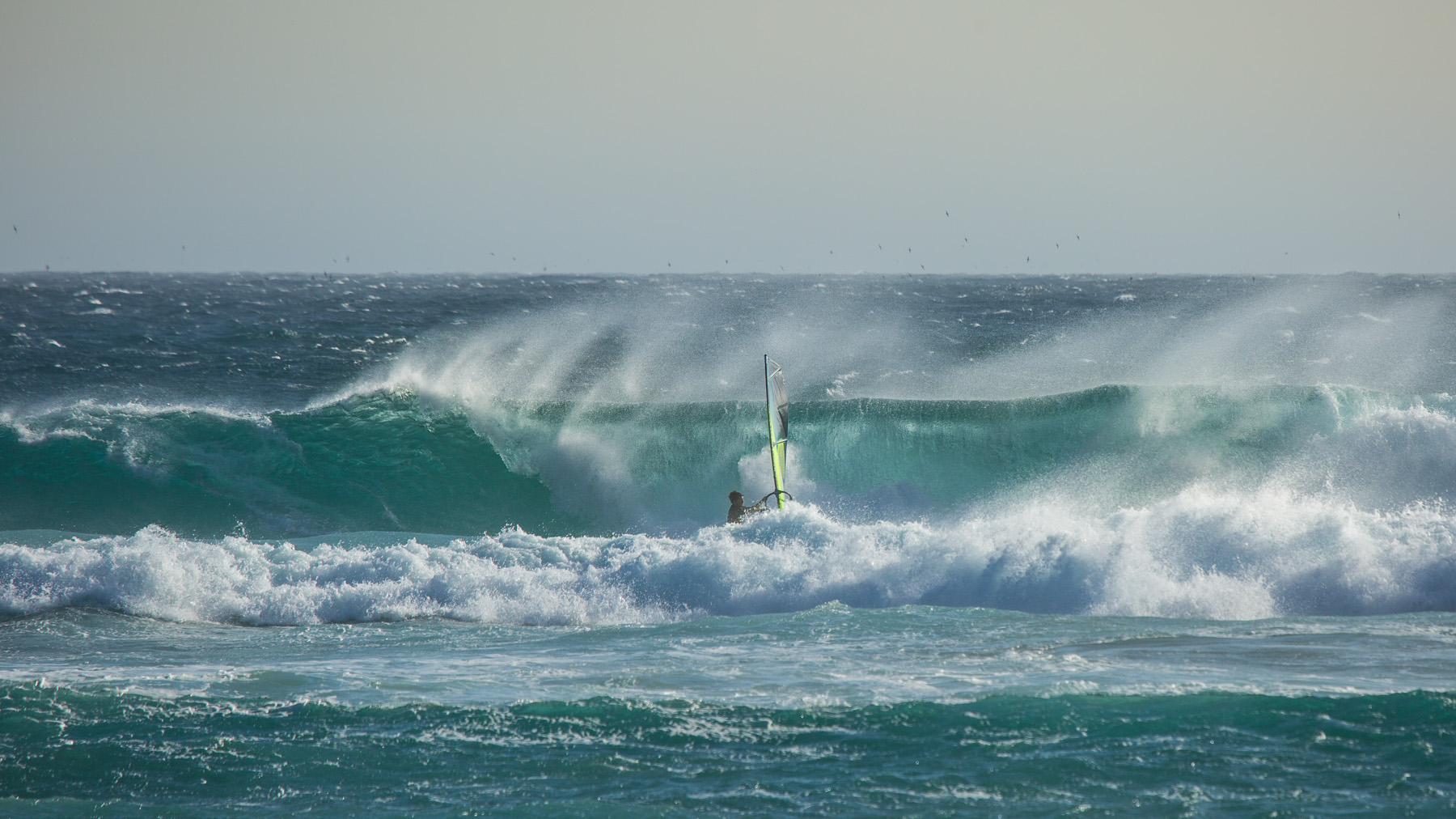 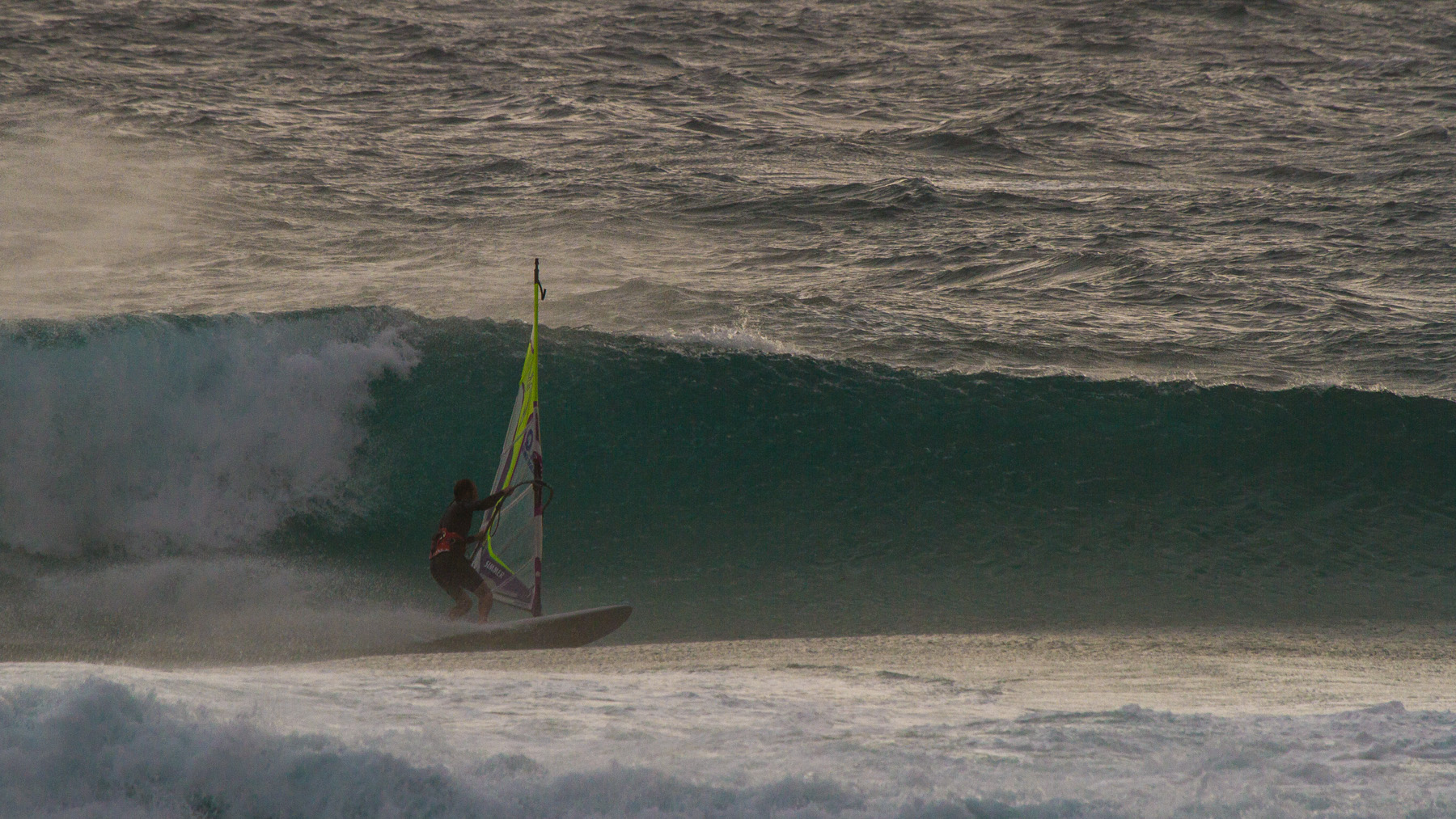 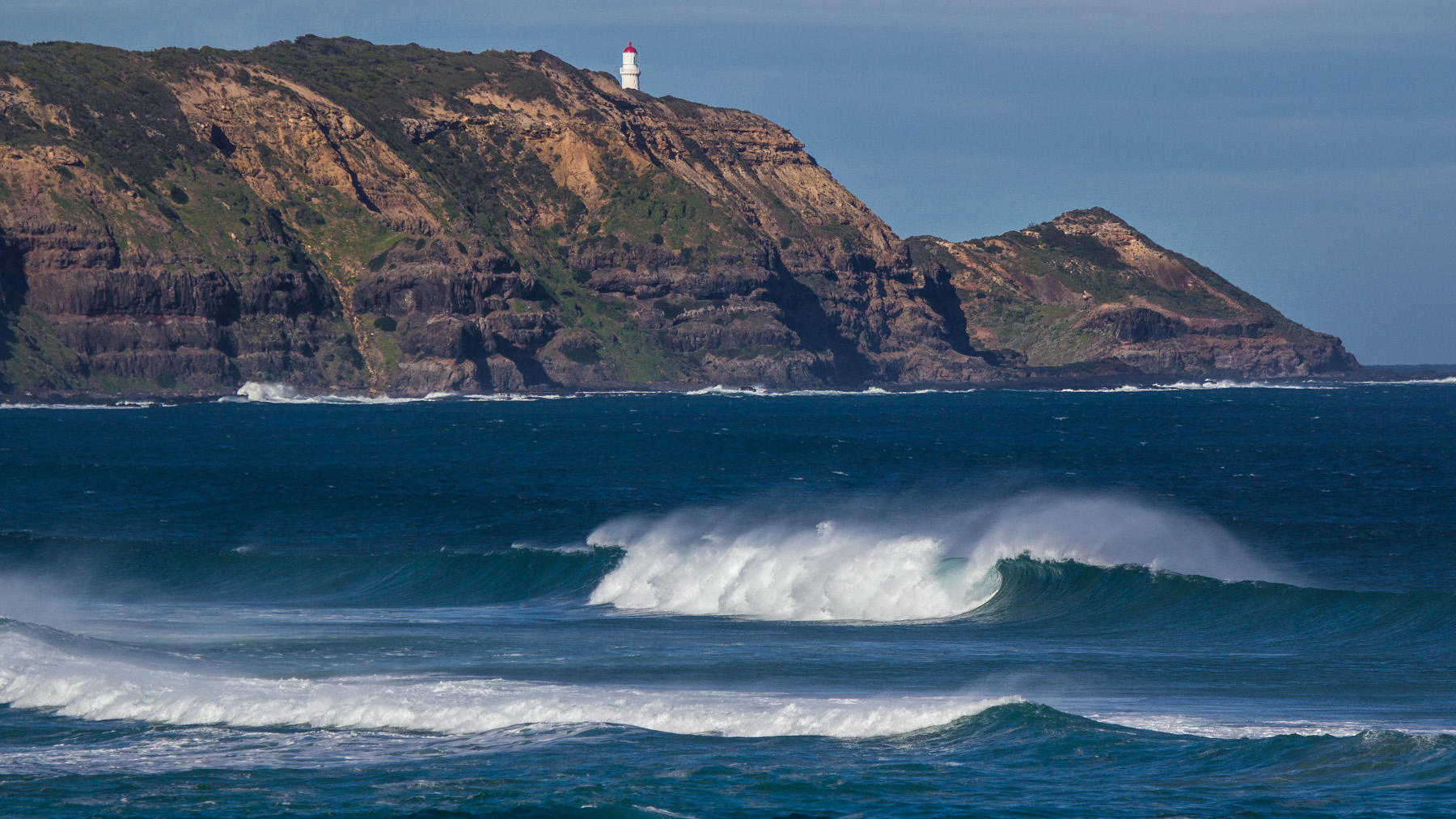 Above: Gunnamatta on a building E-SE. Note the landmass of Cape Schanck in the background, counterintuitively a more offshore wind is usually windier and less gusty.

Gunnamatta is best on ESE wind which blows cross offshore. Straight SE is generally gustier as the wind comes off the cliffs at Cape Schanck. In E or ESE, the wind has a cleaner run down the slope between Cape Schanck and Boneo. Windsurfing the neighbouring beaches at St Andrews and Rye on these wind directions is technically possible, but is rarely done due to the higher dunes and rocky shorelines.

Gunna is also sailable in winter on NNW and NW directions, a true NW often brings solid swell which is hard to manage. NNW is rare as the wind tends to stick straight north coming over Port Phillip Bay. Woolamai is a much better option on this direction as a northerly in Melbourne and the Mornington Peninsula tends to bend to NNW there.

Gunnamatta picks up any swell that is running. Over 5-6ft it becomes a washing machine of closeouts and horrendous currents. Best under 3ft for less experienced riders and good up to 4-5ft depending on the tide and sand banks. Generally the sand shifts around more often here than at Woolamai so wave quality can be pot luck.

Match the tide to swell size. On very small days low to mid tide can actually be better as high tide will swallow up the swell. Generally though, mid to high tide is best for the typical sandbank setups.

Windsurfing Gunnamatta requires confidence in your equipment, your fitness and your ability. Broken gear is common due to the powerful waves and shallow sand bars.

On very small summer swells, Gunna is ok for intermediates to experiment with classic surfing style setups that are not found at Sandy Point and Waratah Bay – deep channels, defined sandbanks, more consistent shaped peaks and more powerful sections. On days with a proper swell running, Gunnamatta should be left to advanced riders.

Like Woolamai, Gunnamatta and the surrounding beaches regularly claim lives. The rips and rogue sets are legitimately dangerous and are a shock to the system for those who windsurf exclusively in small, soft waves like Sandy Point.

For experienced riders, the hazards are generally obvious and manageable – especially with some knowledge of where the rocks are between the first and second carpark.

Large, Powerful Waves
With good sandbanks and defined rips, expert riders can negotiate big swell at Gunna quite successfully. On low tide or days where the sand is not lined up well, the impact zone is not somewhere you want to be. It typical to see powerful freak sets more than twice the average size breaking much further out. Minimise the risk of being hit by one of these, get out the back and stay out the back, choose waves without bigger ones lurking behind, and kick off your rides early whenever possible.

Shorebreak & Backwash
On high tide the shorebreak can be mean, especially on lighter wind days. As the tide fills in, the wind tends to get more sheltered by the sand dunes. Be careful heading in and out. On low tides and certain sand setups, there can be strong backwash sending half a metre waves back out to sea. These can cause havoc when trying to ride the waves on small days.

Rocks & Reef
When windsurfing at the second carpark the rocks should not be a problem if you know where they are. It is possible to get washed onto them (not fun) if you take a wave too far or get caught inside. Stay upwind of the wooden stairs and lookout at the second carpark to avoid them. If the wind drops and you are in front of the second car park area, do not try to head straight in unless you are on a swell. Instead, go out further and head downwind to skip the rocks and come in closer to the first carpark.

Surfers & Swimmers
Less people will surf at Gunnamatta than Woolamai if it is really windy, simply because the surface conditions are worse. On 15-20 knot days though it is pretty common for surfers to be out. They will typically surf the rights that hold up better in a cross to cross offshore wind. Be conscious of them and don’t go tearing through groups of surfers at full speed. Lifeguards regularly set up the swimming flags on the edge of a bank in front of the second carpark lookout so stray swimmers can be an issue on smaller swell days. Try another bank further away instead.

Kiters
Gunnamatta is more popular with kiters than Woolamai, many of them are not very experienced riding in cross offshore wind. It is not unheard of to have kites go down in the line up or kites being ditched at sea when something has gone wrong. Keep an eye out, and help them if needed. 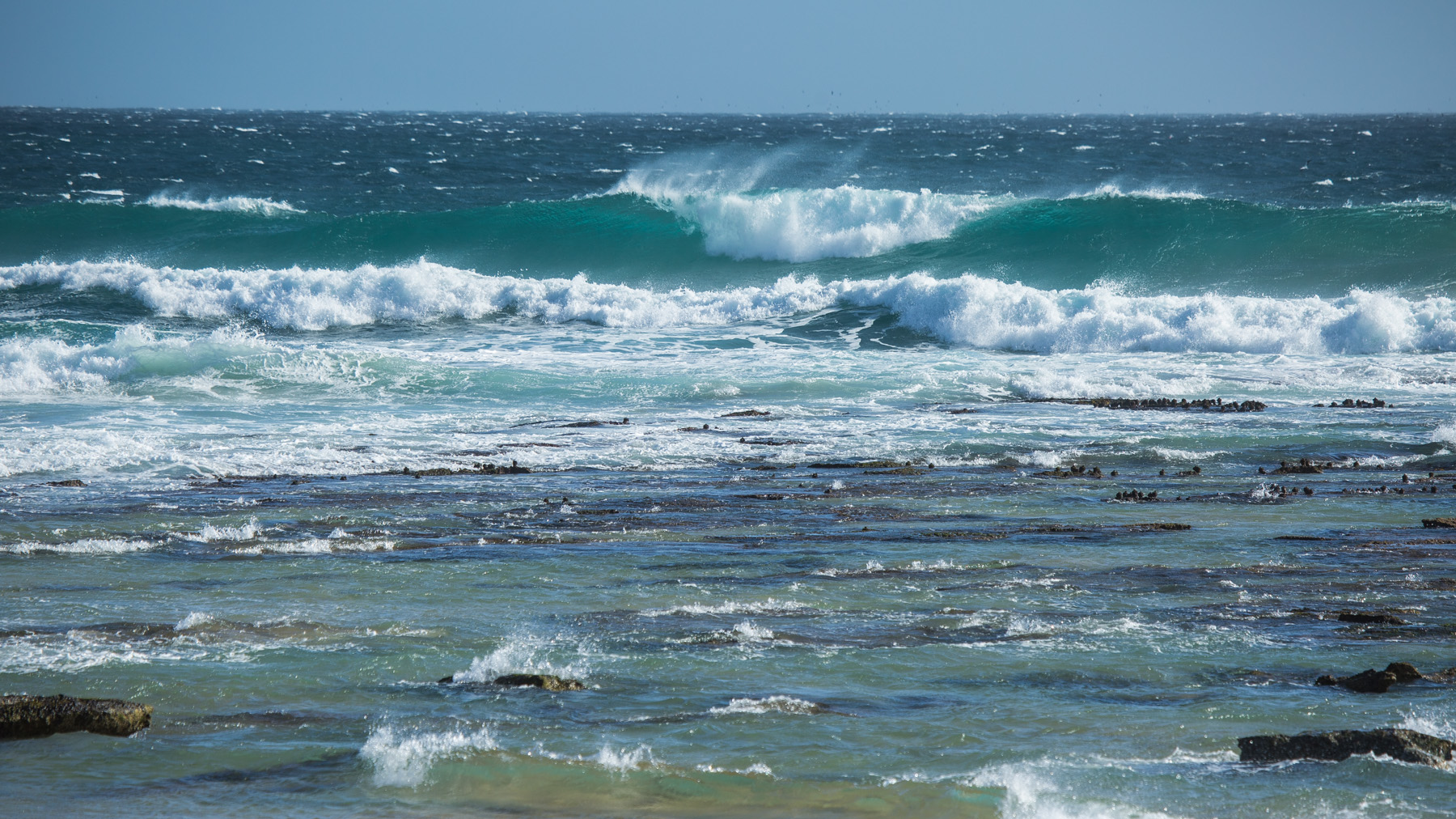 Above: The rocks separating the first and second car parks. Do not try to sneak in before the rocks if the wind drops out or you get caught by big sets. You are better off staying out, going wide of the rocks and coming in downwind at the second carpark.

Below:
1. This was a classic late summer Gunnamatta day – 25+ knots ESE, with a long, high quality left half way up the beach.

2. For those with the ability, the powerful sections are ideal for massive punts. 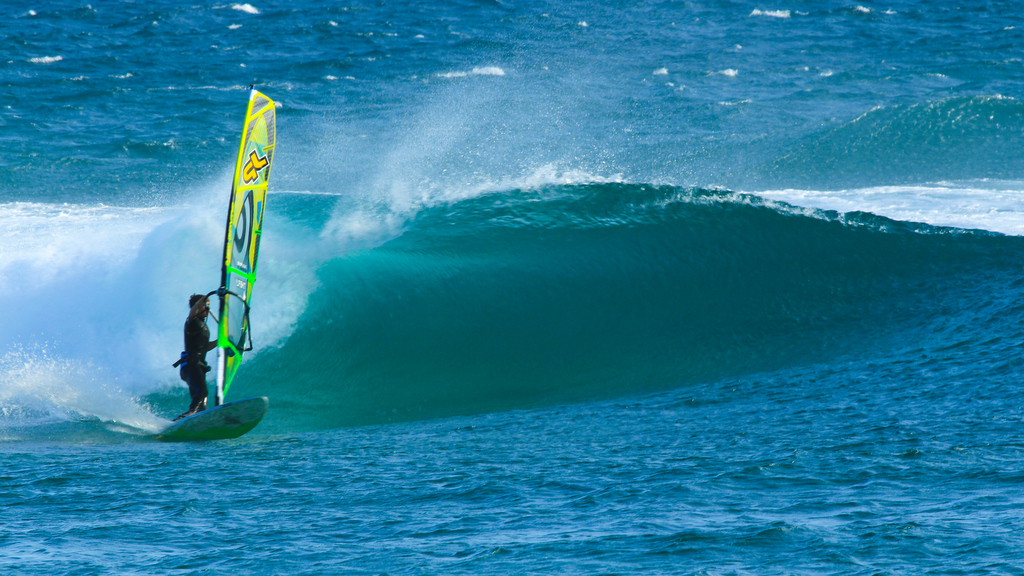 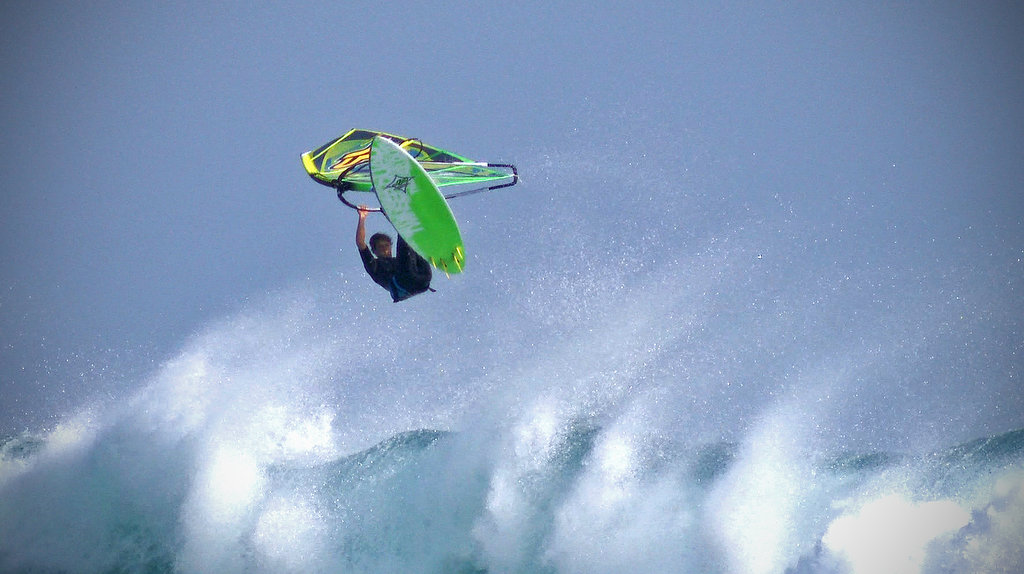 Warm and sunny with an E-SE pattern forecasted means you have pretty good odds of scoring Gunna. If Windguru is saying 17 + knots, and BOM Meteye shows good wind from mid afternoon then it should be on. Be wary of late wind forecasts – on days that show strong wind kicking in from 6pm it becomes a gamble. Sometimes the wind will hit just before dark – so take a surfboard in case or drive further east where the wind should kick in sooner.

Forecasts that show SE or SSE are likely to be crap, especially if it is cloudy and/or wet – don’t bother.

Check the swell forecast on Swellnet here, this forecast is for the Gunnamatta area. Err on the side of caution, the sets will tend to be bigger than what was forecast.

The closest live wind readings to Gunnamatta are South Channel Island and Cerberus.

South Channel is useful, but not infallible – on some days the wind would have hit Gunnamatta for 1-2 hours before South Channel shows it. Use Cerberus to gauge if it has swung E-SE on the coast and use the Trigger Brothers webcams for Flinders, Rye and Gunnamatta to judge surface conditions. 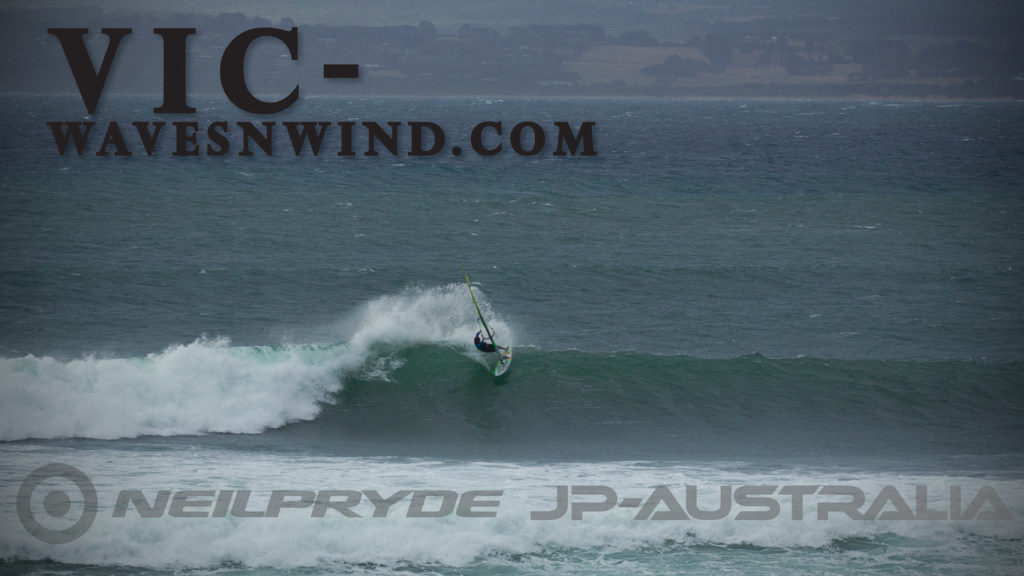 A short windsurfing clip with wave action from Victoria over the past couple of months.