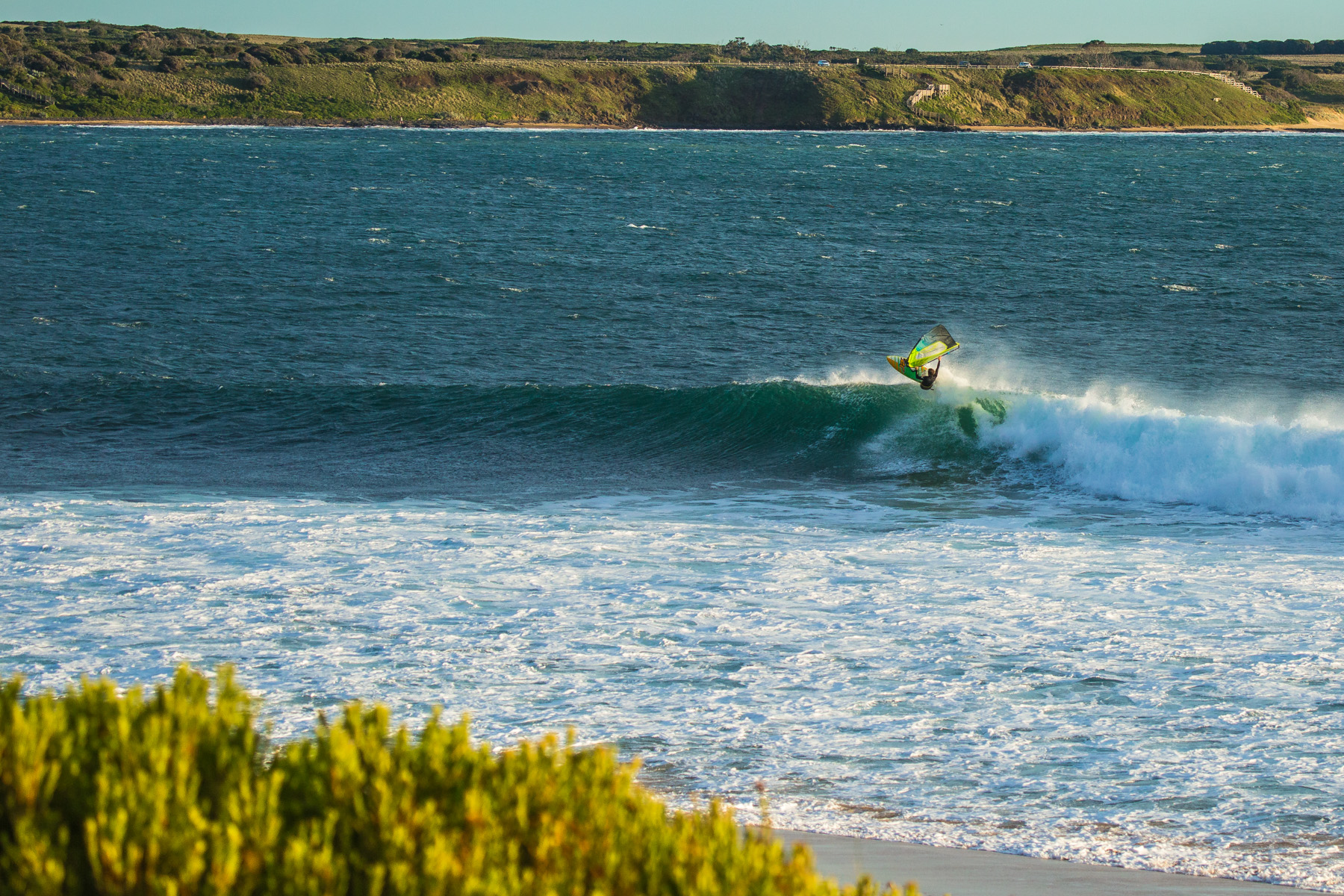 Flynns Reef is a fickle reef break, tucked away on the Westernport side of Phillip Island. The wave is unique in terms of Victorian windsurfing setups, breaking very close to shore over shallow reef but with uninterrupted wind thanks to the open fetch from the north.

Flynns is a short wave that has many faces. Two peaks shift between north and west sections of the reef, making positioning challenging to capitalise on the hollow sections breaking over shallow rocks before the wave quickly fattens off into a deep channel. The shorebreak is horrendous with the sand quickly dropping away from the beach. On medium to large swells getting in and out from the beach can be challenging, with the shorebreak easily destroying equipment.

On good days, Flynns is an excellent spot for high performance riding with tight, steep pockets for big turns and bowls to hit aerials. When it is small, it is suitable for intermediate riders to test themselves on a proper surfing quality reef break. 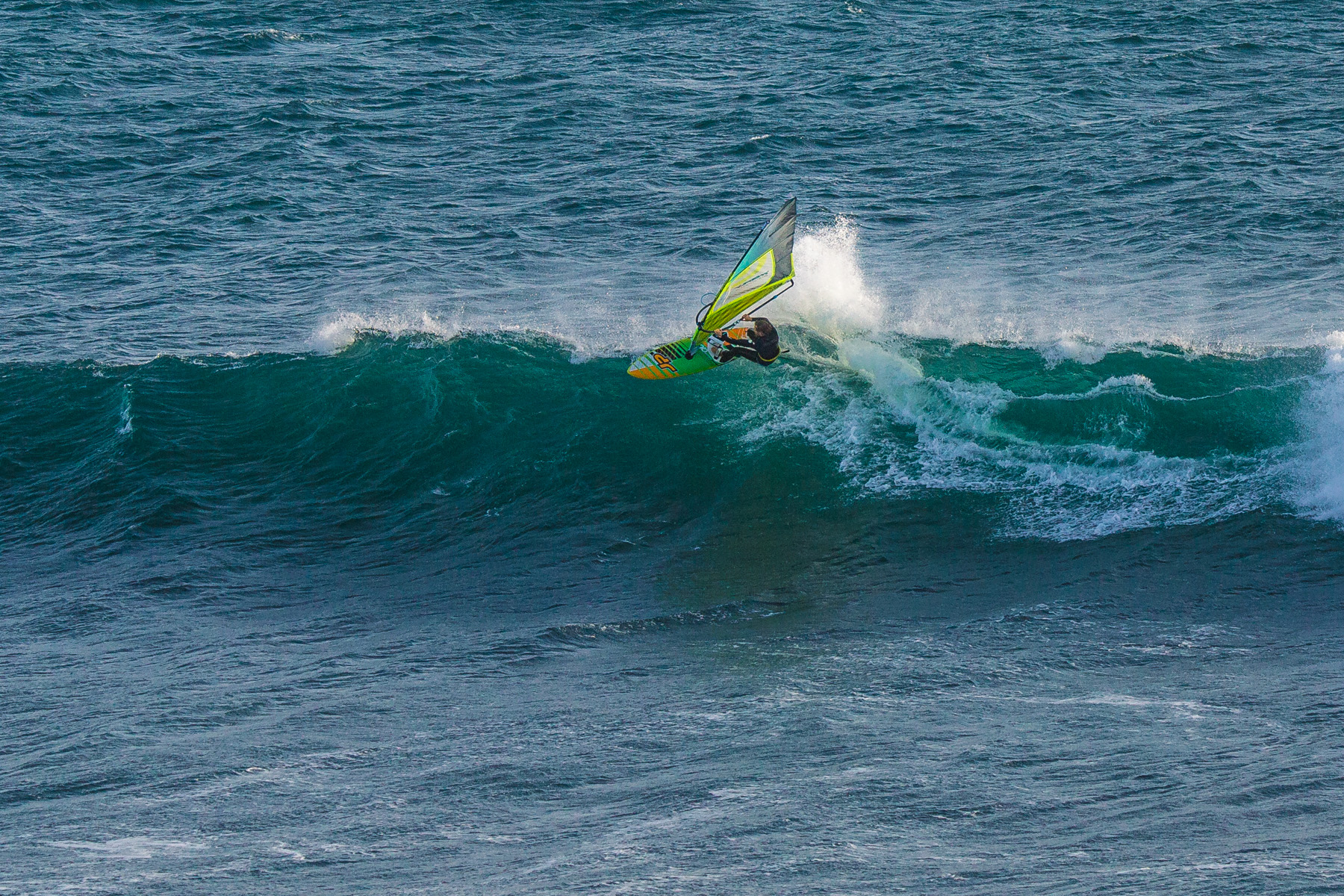 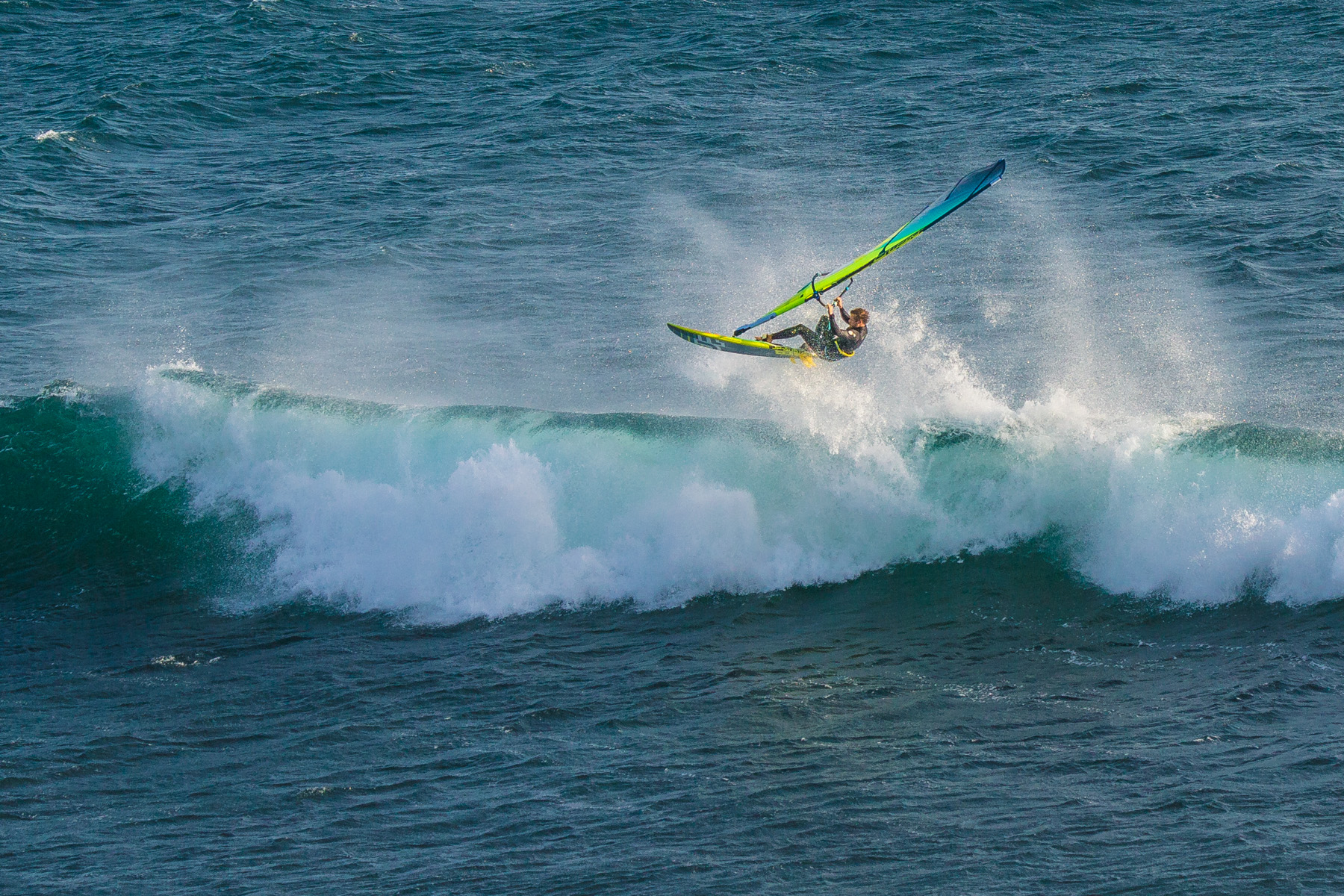 Above: An average fun session at Flynns, with about 2m average swell at Pt Nepean. 3-4ft sets with long waits, 15-20 knot northerly wind.

Below: Flynns from the beach on a 1.5-2m swell. This angle shows how short the wave is on an average day, normal rides are two turns before hitting the channel. 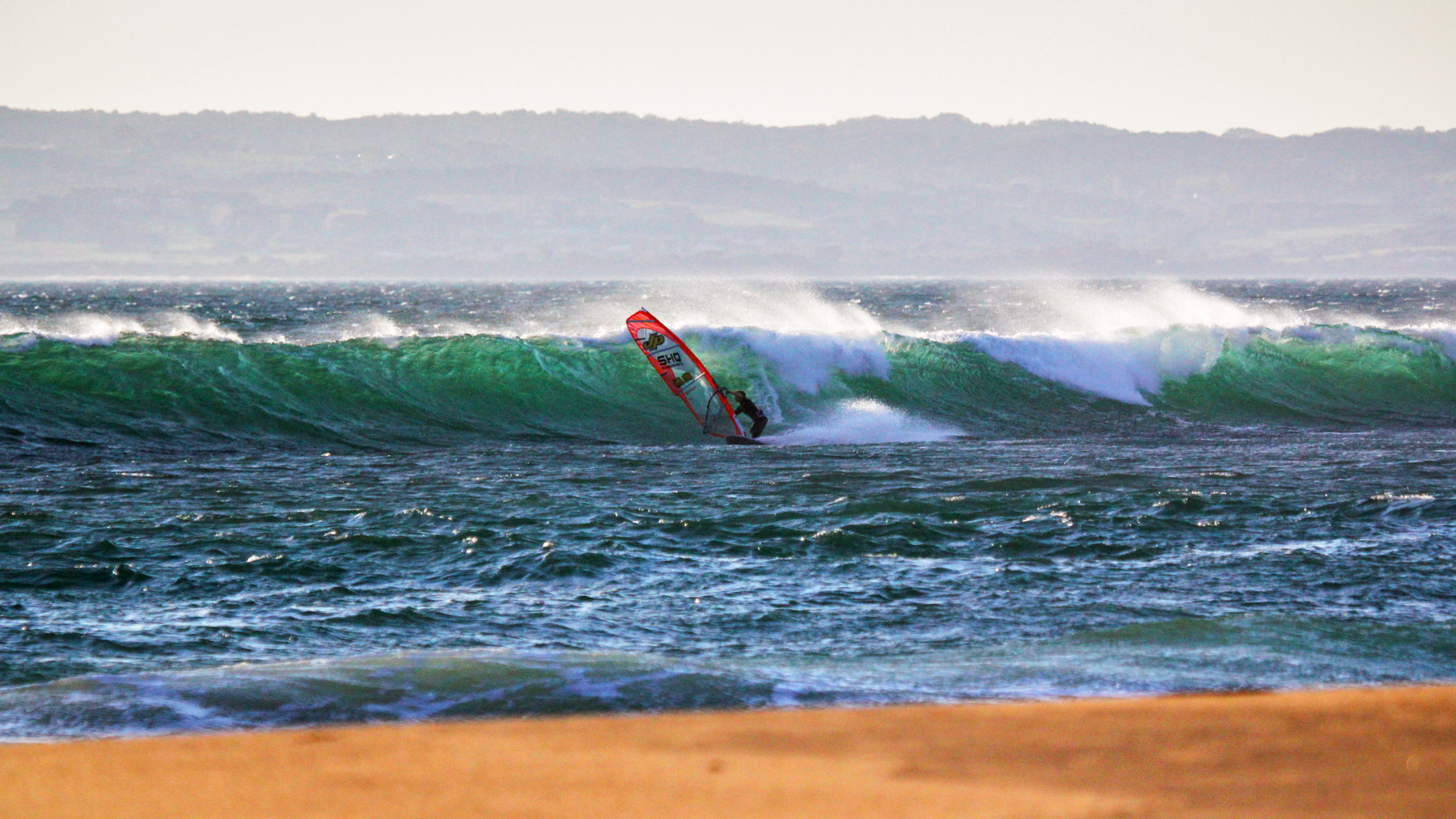 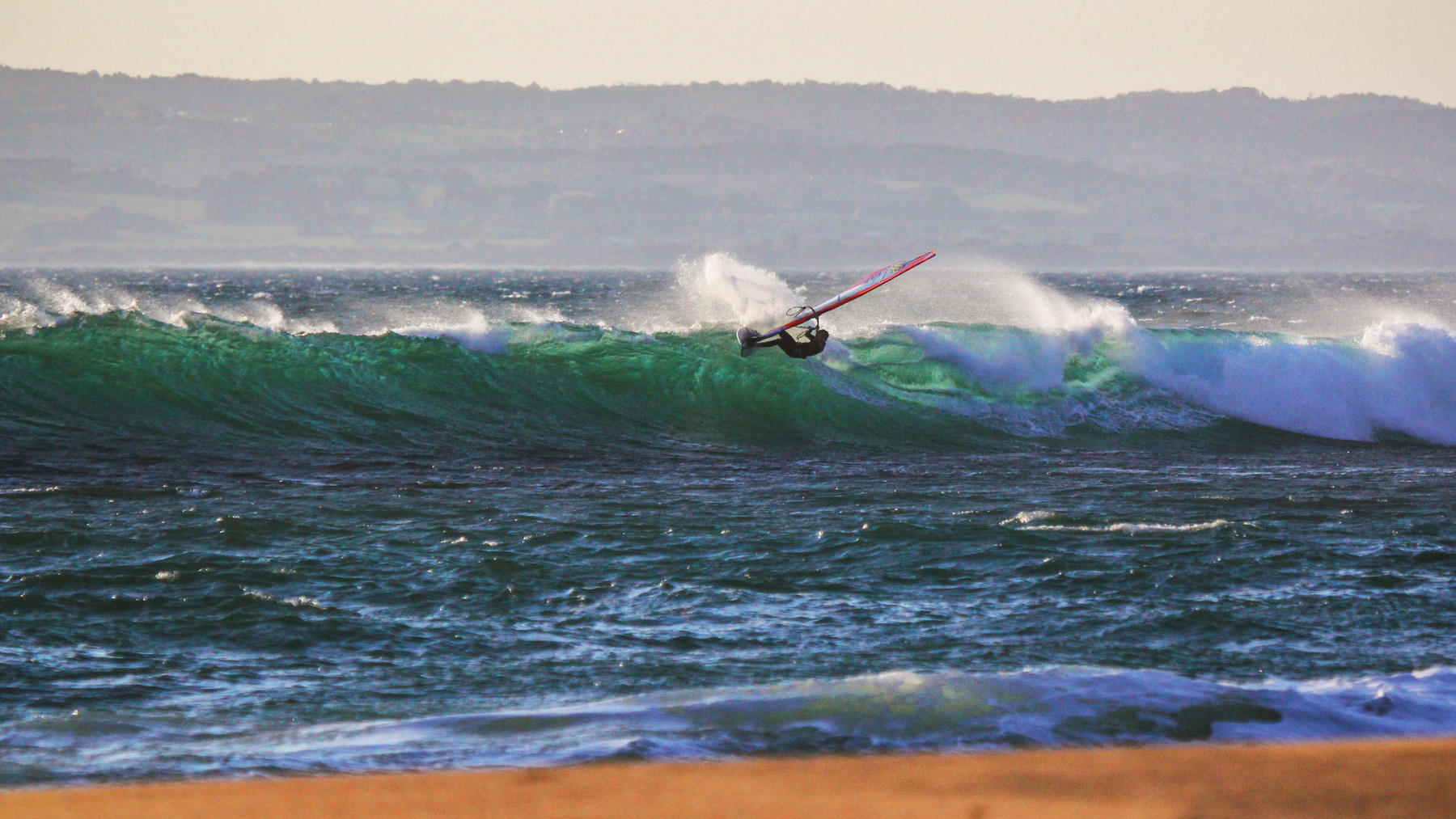 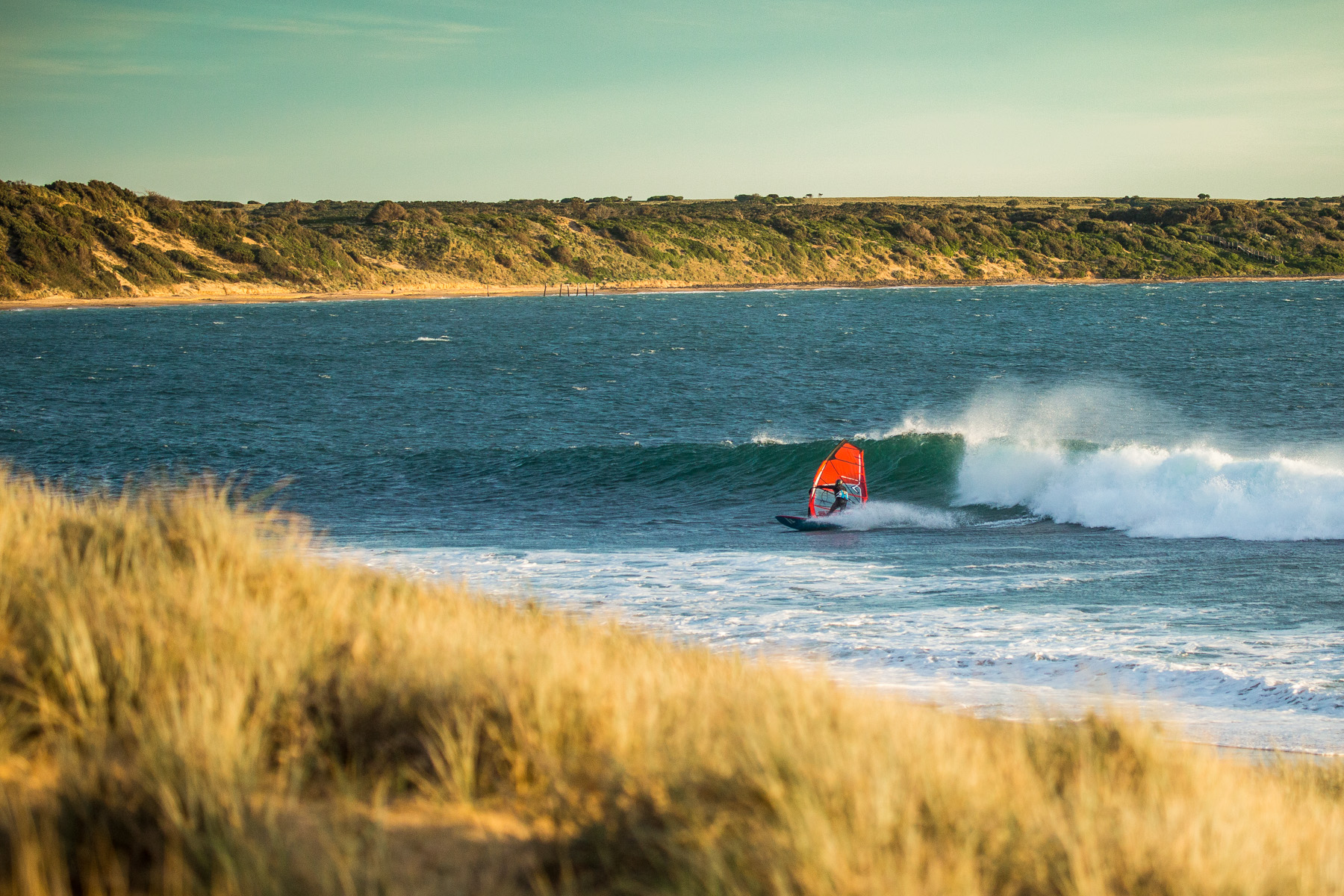 Above: Bottom turning on the end bowl. Riding Flynns well requires good pacing, too slow and you’ll be caught on top of the rock as the wave sucks up surprisingly quickly, too fast you’ll be shoulder hopping in the channel with nothing to turn on.

Below: Fall at your own peril. If you lose your gear on a wipeout the chances of ending up in the shorebreak are very high – if the swell is big it is almost guaranteed. In the shorebreak snapping your mast, ripping your sail, hitting your board on a rock or all of the above is probable. 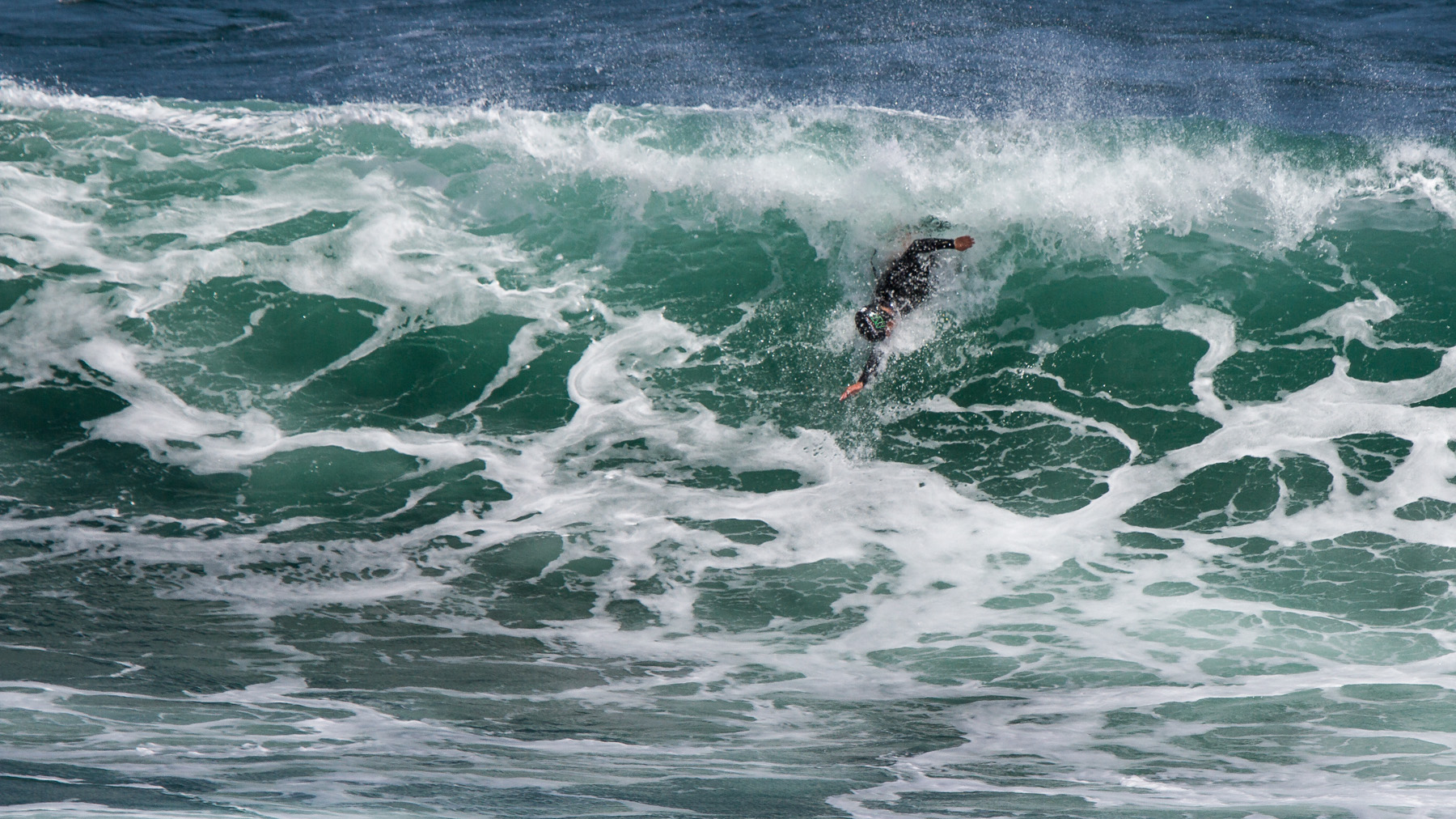 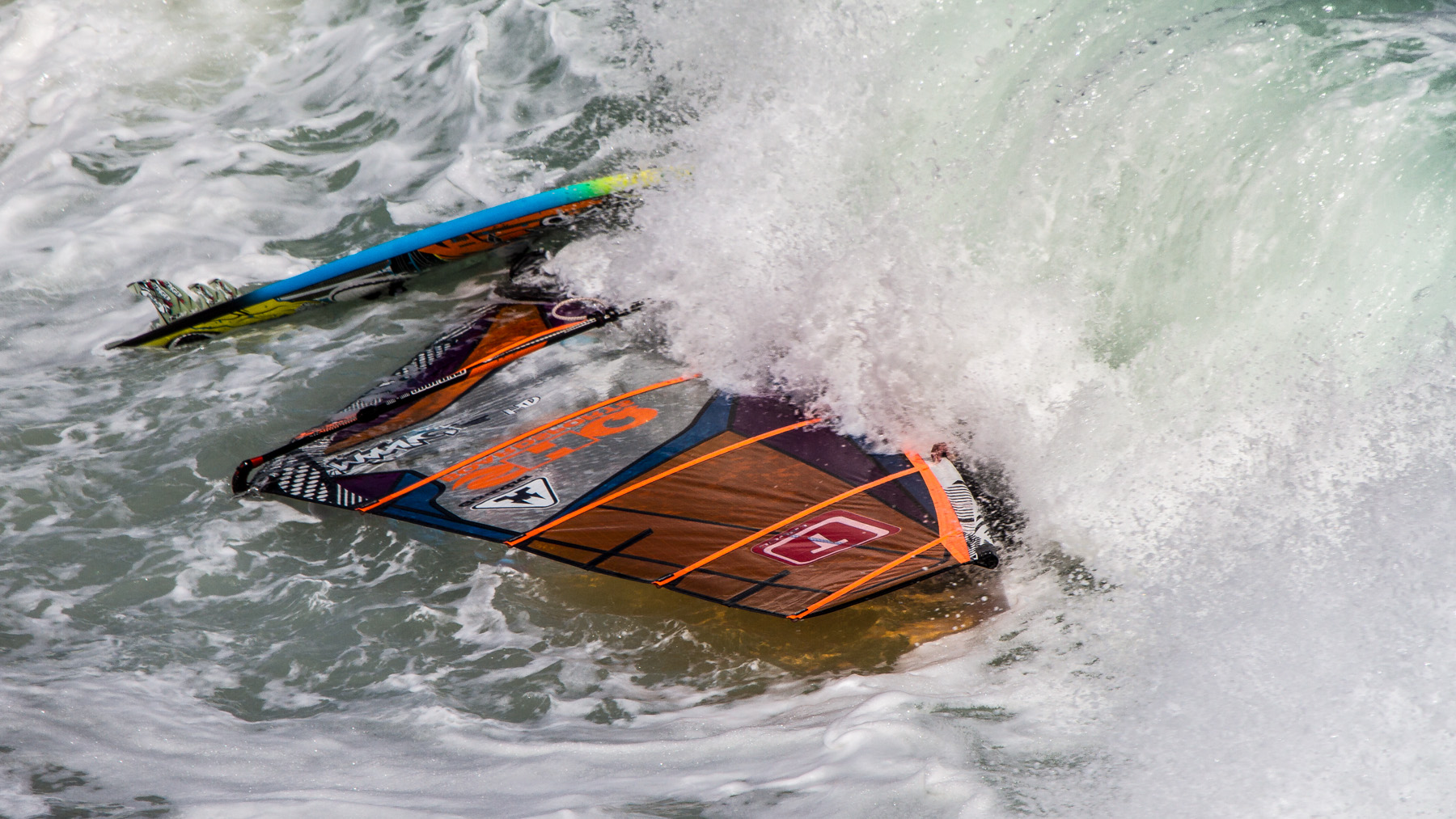 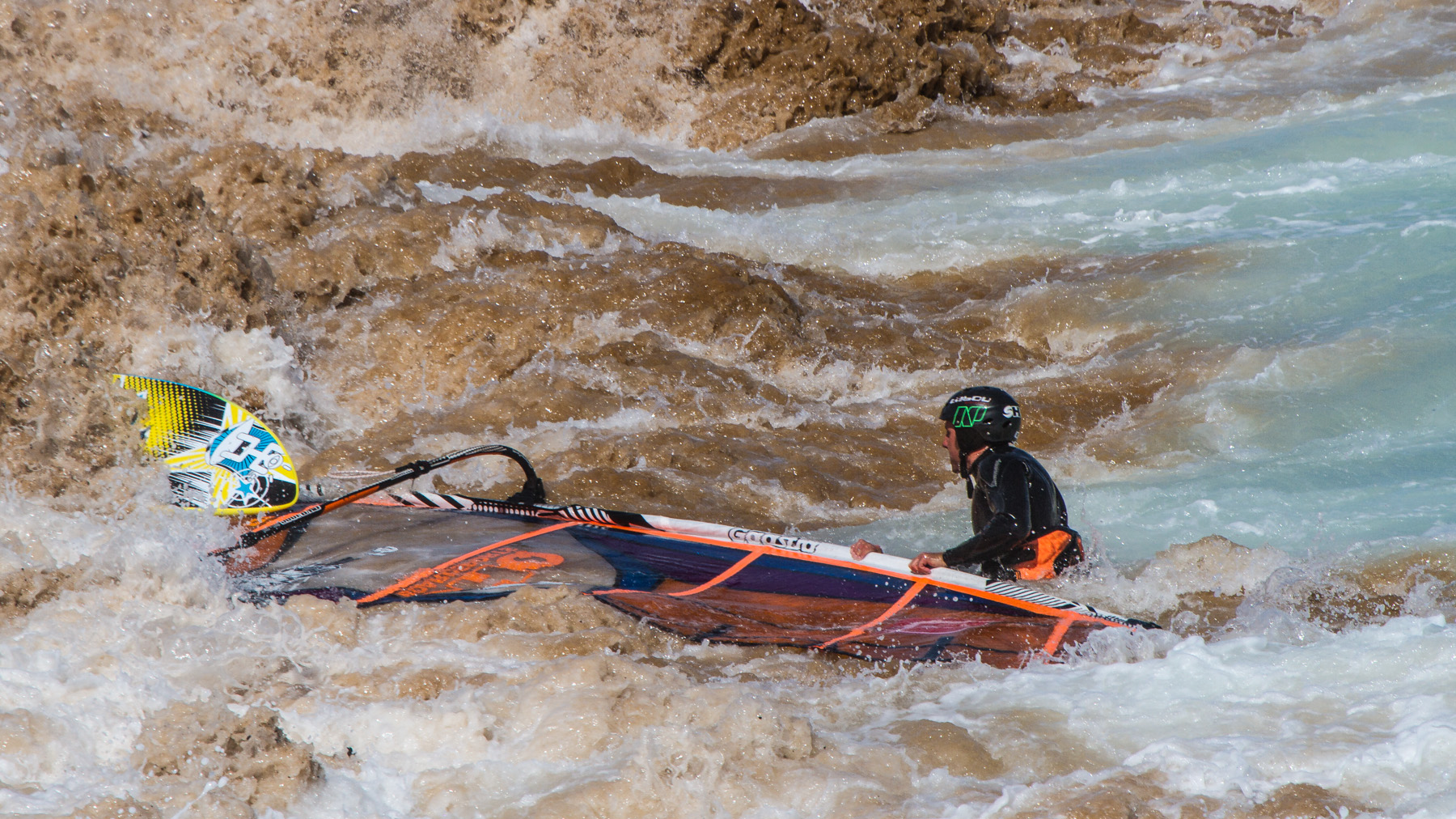 Flynns needs a northerly wind forecast, which normally ends up being NNW at the break. If you do score a true northerly, the wave quality is dramatically better with smooth faces, hollower sections and more power in your sail thanks to the more cross offshore direction. NW is sailable but choppy, jumping is possible but tricky due to the short run up before hitting the waves.

On low tide Flynns is dry rocks, at least mid tide is recommended before windsurfing. On high tides there can be backwash from the shorebreak bouncing off the steep beach, making timing your bottom turns tricky. Generally for small swells, mid tide is better to stop the waves being swallowed up by the deep water. As with all Westernport waves, the swell is normally more consistent on incoming rather than outgoing tides.

Flynns Reef caters for intermediate and above wavesailors, some surfing knowledge and strong flat water fundamentals are recommended before trying the spot. Get a feel for it on a windy day with minimal swell to learn how to negotiate the launch and the shallow sections of reef. Be aware that the Flynns shorebreak is a different beast once the swell jacks up. Experienced riders will often have a tough time reading the wave on their first try, getting a few sessions under your belt will help with this.

Heavy Shorebreak
The shorebreak is menacing on big days, and can easily break your equipment and injure you if slammed on the sand or boulders scattered around. When the swell is up, launch right in the corner of the wave to sneak out in the gap between where the wave ends and where the swell forms into the shorebreak. On small days you can get away with launching right off the beach if you time it right.

Rocks & Reef
On lower tides the north peak can be extremely shallow, do not get caught inside or you can damage your equipment on the rocks.

Kiters
Kiters of varying ability frequent Flynns, many of them do not follow proper lineup etiquette – do not let them drop in on you and stuff you behind the section onto the rock where you can break your gear or easily be pushed into the shorebreak.

Surfers
Surfers often will head out at Flynns on large swells if the wind is under 20 knots which can be frustrating for windsurfers. Keep cool and work around them, normally they will leave to go try somewhere else with a proper offshore wind.

Sharks
Seals are a regular sight at Flynns, the large Nobbies fur seal colony is only just around the corner. Big sharks are seen in the area from time to time, be aware and if seals are behaving erratically or try to escape the water, a shark could be lurking nearby. 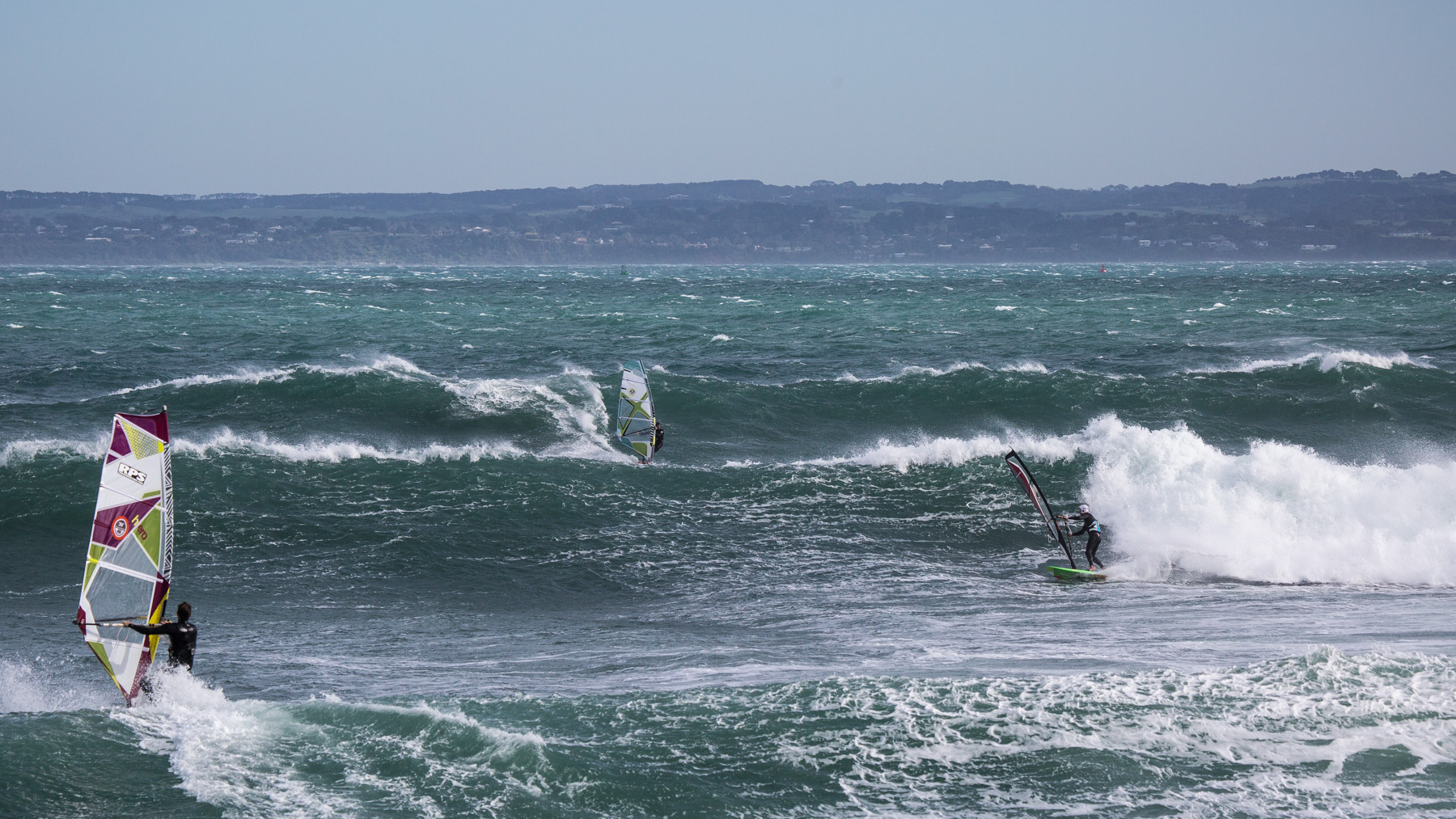 Above: the Flynns Reef lineup. This is a 3m+ swell, with a 30 knot NNW wind. On days like this the waves come in well formed sets, it is often possible to catch two waves from the same set.

Below:
1. Flynns on a small swell and high tide. Often the wave becomes a one turn wave with a short bowl running straight into the channel. Good for intermediates on days like this. 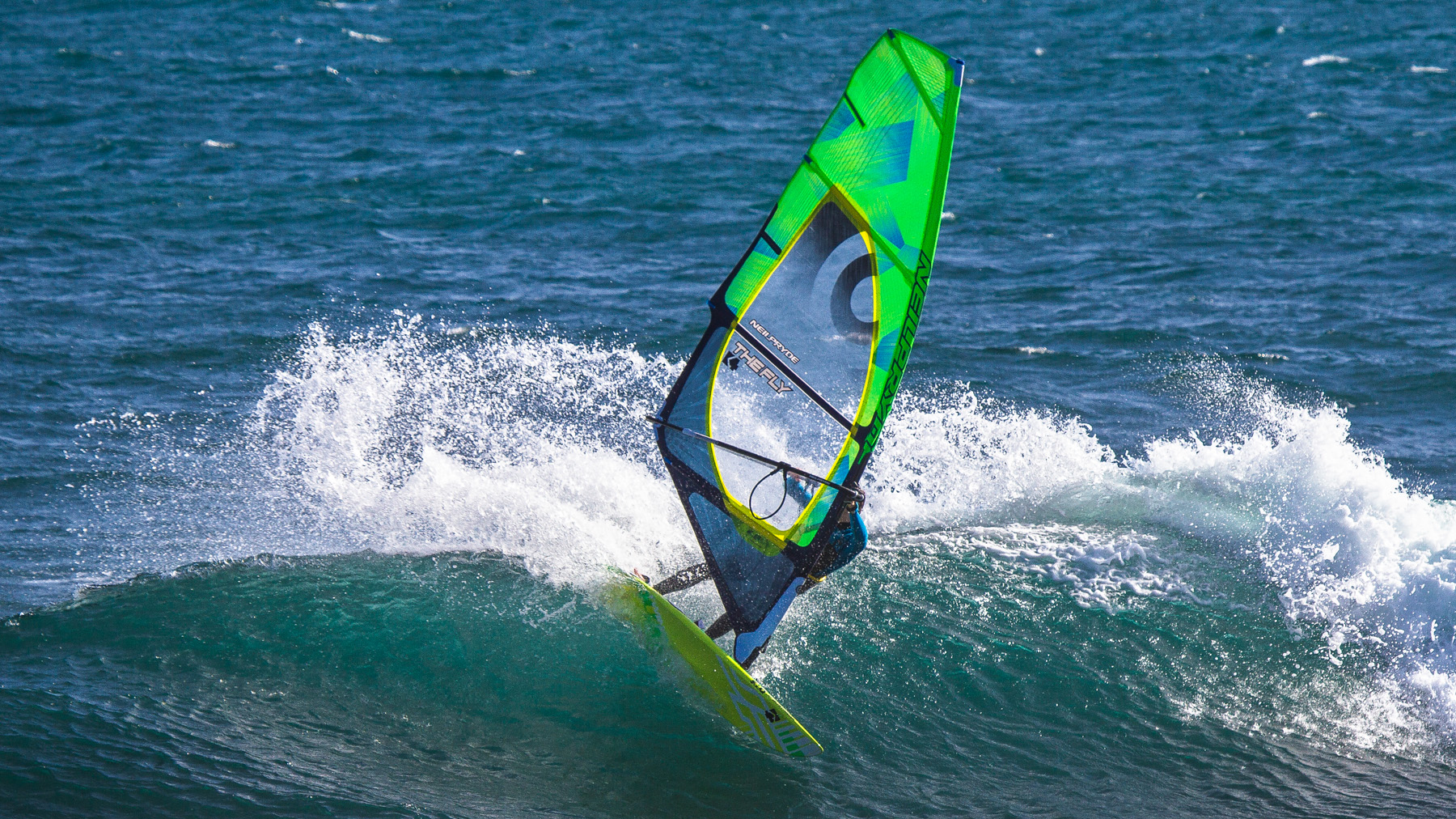 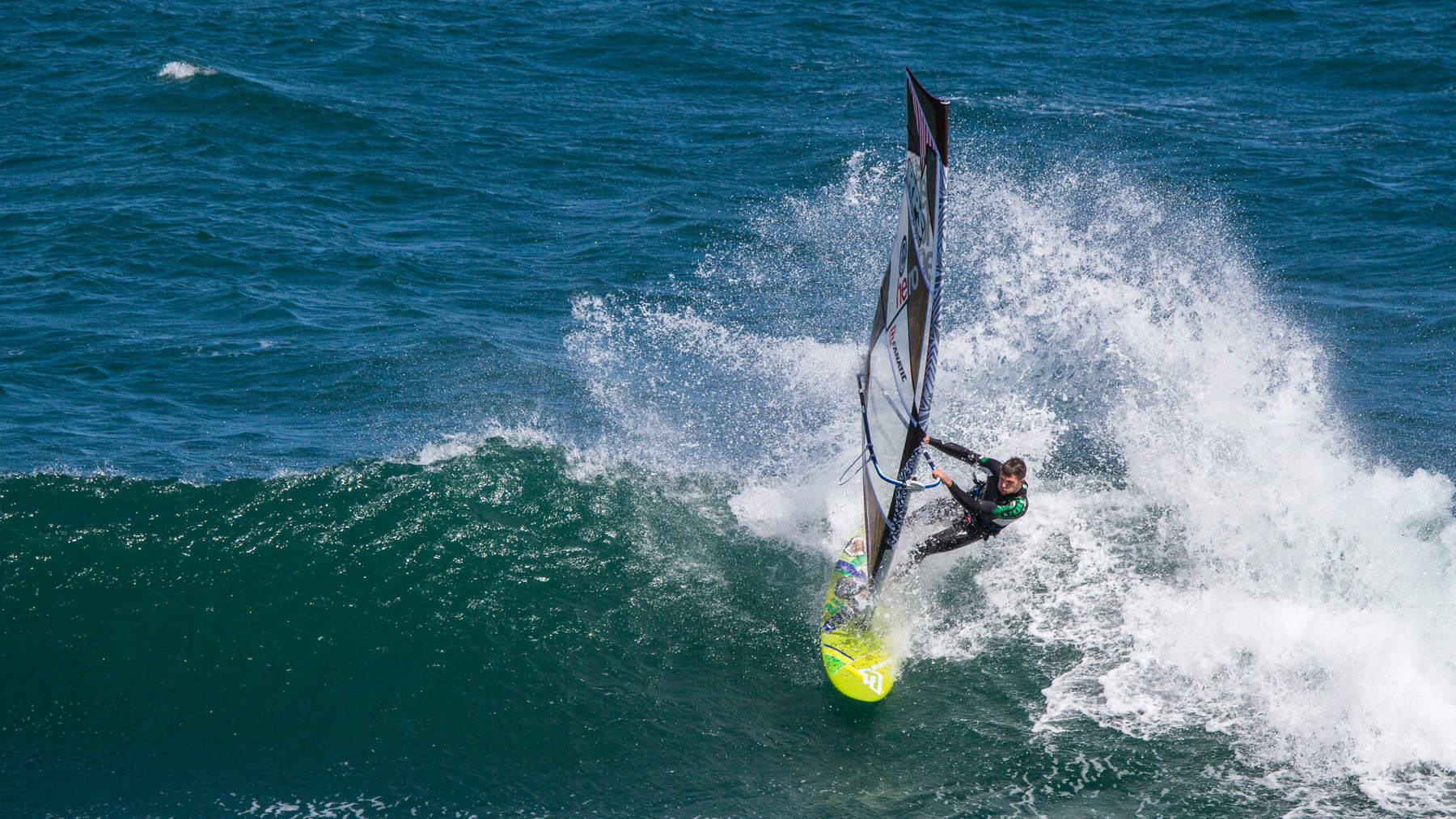 Strong N wind is actually rare at Phillip Island, with northerlies on Port Phillip Bay tending to bend slightly to the west across Western Port. A typical Flynns session will be with NNW wind which is cross shore. Small swell and light NNW can be tricky with little power on the wave face. Strong NNW leads to a wind swell fetch coming across Western Port, ruining the wave quality.

Check the swell forecast on Swellnet here, note that the Mornington Peninsula forecast is for the open beaches. 5-6ft on the open beaches is enough for Flynns to start working. If the wind is strong but Flynns is too small, try sailing Woolamai instead or go surfing.

Check live readings from Pt Nepean Swell Buoy here. Flynns will not break unless the swell is at least 1.5m average swell height with a good wave period. On this size swell it will be small and inconsistent, with high tide swallowing up the waves – mid is better. The wave starts to work properly above a 2m average swell, with 3m+ being excellent.

The closest live wind readings to Flynns are Rhyll and Cerberus.

Rhyll and Cerberus generally understate wind strength and are more useful for understanding direction. If Rhyll is showing true N, then the wind is ideal for Flynns. Use South Channel Island to estimate wind strength on the water at Flynns (it is usually slightly less). 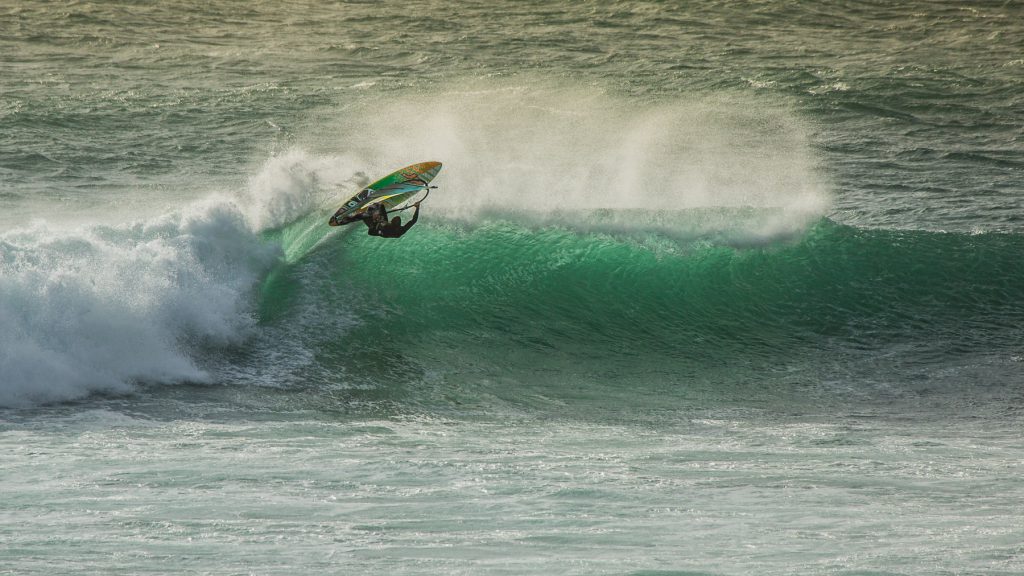 It isn't a secret that Phillip Island is my favourite all round spot for windsurfing and surfing in Victoria. Reliable [...]